Last Friday I took issue with Vice President Mike Pence’s commencement address at the U.S. Naval Academy, in part because he exhorted graduates to “Follow the chain of command without exception. Submit yourselves, as the saying goes, to the authorities that have been placed above you.”

His allusion to Romans 13:1-2 (or 1 Peter 2:13-14) got me wondering whether those biblical passages had featured prominently at earlier times in American public life. So I did some digging on that question for my post this morning at The Anxious Bench. 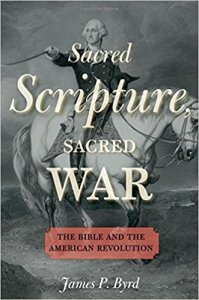 Not surprisingly, historians like Mark Noll and James P. Byrd have found that biblical language about submitting to governing authorities was hotly debated before and during the American Revolution. But revisiting Lincoln Mullen’s America’s Public Bible project, I was also struck to find Roamns 13 showing up fairly often in the 1840s and 1850s, in the midst of the national debate over slavery. For example, here’s how one Southern newspaper editor critiqued northern preachers who called for obedience to temperance laws and disobedience of the Fugitive Slave Act:

The human law must accord with the Divine Law in order to render obedience a duty! They do not condescend to inform us who is to be the judge of that accordance. They dare not. Well knowing that the right of private judgment is one of the most valued rights of Protestantism, they are aware that their doctrine translated into plain English amounts to this: that if any and every man in the community chooses to consider any law unscriptural, it is their duty to disobey it—a principle which, if carried into practice, would of course lead at once to rebellion and anarchy….

The true doctrine on this subject is set forth in the words of Inspiration itself:— “Let every soul be subject unto the higher powers. For there is no power but of God: the powers that be are ordained of God. Wherefore ye must needs be subject, not only for wrath, but also for conscience sake.” [Rom 13:1,5, KJV]