Back in March, when Donald Trump was nothing more than the surprise leader in the Republican primaries, the fact that he was getting even 40% of the self-identified “evangelical” vote had already led Southern Baptist leader Russell Moore to declare that religious term “almost meaningless this year.” Even worse, “in many ways the word itself is at the moment subverting the gospel of Jesus Christ.”

The word "evangelical" no longer has any meaning. Just call me a gospel Christian.

“If a leader of the largest denomination in the National Association of Evangelicals, the author of Christianity Today‘s Book of the Year, can’t call himself an evangelical right now,” I wrote (in a post I’m reconfiguring today for the aftermath of the election), “who can?”

At that point I wasn’t ready to give up “evangelical” altogether. Even now, after 81% of evangelicals helped make Trump our president-elect, I come back to something the Evangelical Covenant writer and educator Karl Olsson once said: “It is much easier to use an honorable word as a dishonorable handle.”

But he was actually referring to another religious label: one that has been as misunderstood as “evangelical,” and one that may now be poised to emerge as a helpful alternative to it.

If you’re done with “evangelical,” let me suggest you consider “Pietist.”

To paraphrase my denomination’s president, I strongly suspect that many evangelicals are actually Pietists — they just don’t know it.

Now, I don’t pretend that every evangelical is a Pietist, or vice-versa. But the connections are not merely historic, confined to the influence that German Pietists like Phillip Spener, August Francke, and Nicolaus von Zinzendorf had on 18th century evangelicalism (in part via John Wesley). And while I know that “Pietist” carries its own baggage, treated by evangelicals and non-evangelicals as synonymous with everything from “anti-intellectual” to “legalistic” to “world-denying,” it is nonetheless an “honorable handle.”

And I suspect that this election, and what it reveals about several corners of the American church, only underscores what Baptist historian Virgil Olson once wrote: that Pietism will take on new importance anytime people grow dissatisfied with any kind of “superficial Christianity… that has the form of piety and lacks the power thereof.”

If you’re a longtime reader of this blog (or The Anxious Bench), you know that I write often about Pietism. But if you’re one of the thousands who came here for the first time yesterday after I wrote my post decrying evangelical support of Trump, then you might be interested to learn that I’ve got a new book coming out: Hope for Better Times: Pietism and the Future of Christianity.

Alas, my co-author Mark Pattie and I just submitted the manuscript, and the book won’t come out for several months yet. So if you’re done with “evangelical” and want to explore a religious ethos that is both older than evangelicalism and can perhaps renew what’s best about it, let me sketch the outline of the book for you:

First, what is “Pietism”?

We’re defining it not simply as an old religious movement, but as a timeless religious ethos that serves to leaven other forms of Christianity. We define it in terms of four religious instincts, including tendencies to relate to God less as an abstract idea than as a person, to think that Christians are better together than splintering, and to hope for better times.

But the Pietist instinct that’s hardest to explain succinctly may also be the one that’s most salient for this political-cultural moment. Let me sum it up in this way, quoting loosely from our introduction:

First, Christianity is less than we tend to think. In that Pietists do not place their faith in the same scales the never-satisfied world uses to measure success: status, power, wealth. They know that authentic Christianity cannot be coerced through political might or social pressure, or enticed through cultural relevance or economic incentives.

But second, Christianity is also more than we think. Just when Christians are ready to give in to weariness and cynicism, they’re ready to be reminded that living faith in the resurrected Christ leads to transformation. Of individuals and congregations, but also of a world that is being made new — not necessarily through the acquisition and exercise of power, but through self-effacing, other-embracing acts of service.

What’s wrong, and why should we hope for better times? 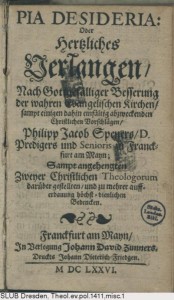 Following the structure of the 1675 book that helped launch the original Pietist movement in what’s now Germany, our first two chapters attempt to sketch what’s wrong with present-day Christianity and why we should nonetheless hope for better times.

I took the “What’s wrong?” chapter (here’s a preview), and had lots to say about several topics. But here’s something that might seem especially relevant in the aftermath of such a divisive election:

Increasingly, we have different values based on different sources of information and lived out in relationship with different groups of people. We’re even living in different places, with liberals favoring cities and conservatives small towns and rural areas. And online, where sophisticated algorithms already use our stated preferences to shape the news we read and the arguments we consider, we trim the list of neighbors by blocking and unfollowing those who irritate or criticize us.

We are literally seeking out neighbors that we love as ourselves — that is, as if they are ourselves. But that’s not what Jesus meant…. while too many Americans are moving too many other Americans from the category of “neighbor” to something more like “enemy,” Jesus preached, “You have heard that it was said, ‘You shall love your neighbor and hate your enemy.’ But I say to you, Love your enemies and pray for those who persecute you…” (Mt 5:43-44). “My love,” understood [17th century German Pietist] Johanna Petersen, “was very deep when I realized that I gained more from [my enemies] than from my best friends.”

Then Mark wrote about the Pietist commitment to hope — again, a timely word:

We, too, are tempted through sometimes terrifying challenges to abandon our faith in God and rest in the fickle, fleeting powers and inadequate idols of our world. So Jeremiah’s word is one we need to hear and heed. It is more than a call to place our faith in God as a one-time act. Rather, it is an exhortation to continually root our lives by faith in the grace of God. It is a call to persevere in allowing our hope to be nourished in strength and directed in its aspirations by the promises of God. It is an invitation to join with God and others in eagerly serving toward the end that God’s promises are fulfilled and the experience of God’s love becomes the reality for all.

Six Proposals for the Renewal of Christianity

Then we conclude with our versions of Philipp Spener’s six “pious wishes,” practical proposals that could renew the Christian church. Here’s the list, with a sample quotation from each chapter (and a link to a chapter preview, if I posted one last month):

1. Listen more attentively to the Word of God

“…Pietists understood the Bible to be ‘an altar where we meet the living God.’ Far from simply being a receptacle for information — even God-inspired information — the Pietists held that the Scriptures are primarily a God-inspired gift for transformation.”

“While Western Christians often understand holiness, prayer, and Bible study to be private and solitary, to serve in the common priesthood is also public and social…. If we sacrifice, it is not only for personal holiness, but the good of others (from strangers to spouses). If we pray, it is not only for ourselves, but others (from friends to enemies). And while we can dwell in the Word in the solitude of our own devotional time, we must remember that God inspired Scripture ‘so that everyone who belongs to God may be proficient, equipped for every good work’ (2 Tim 3:16-17).”

3. Remember that Christianity, above all else, is a way of life

“Engaging the heart along with the head was a key emphasis for the Pietists. It is clear, though, that their ultimate aim was a life transformed. They fully believed that real and lasting fruit is not only possible, but to be expected. A faith that makes sense in one’s head and even brings warm sentiment to the heart is still not a living faith unless it makes a difference in how one lives.”

“…’making every effort to maintain the unity of the Spirit in the bond of peace’ (Eph 4:3) seems like the easiest platitude to mouth and the easiest conviction to set aside. But the Pietist ethos can help Christians understand that seeking unity — while impossible to achieve perfectly — is essential to Christian community, mission, and witness.”

5. Engage in Christian formation of the whole person for one’s whole life

“…the Pietist vision for Christian formation has implications for all members of the common priesthood: laity and clergy, young and old. It makes clear that Christianity is indeed more than we think, since coming back to Jesus makes possible the ongoing conversion and growth of the whole person throughout one’s whole life.”

“As we look at the ministry of preaching and something we are calling a ministry of listening, we especially want to encourage and even challenge the church to take up our God-given ministry of evangelism. By this, we mean sharing the saving Word of God with both those outside the church and those within it. We are talking about doing so with both our actions and our words. And we are talking about doing this with the kind of loving fervor that can only happen as we share with others that which has made a difference in our own lives.”

While I do think “Pietist” actually describes many disillusioned evangelicals quite well, know that neither this post nor our book is meant (as we write in the introduction)

to produce Pietists! Rather we are convinced that there are tremendous resources available in the rich history of the Pietist ethos that will leaven your faith, which has no doubt been shaped and sustained by other experiences and traditions. But that’s a means to a much greater end.

When God calls each of us back to Jesus, he also calls us back to our roles as members of the Body of Christ. So our hope is that people who share some or all of these Pietist instincts will find themselves better equipped to fulfill what we Covenanters call the whole mission of the church: making disciples of all nations, followers of Jesus Christ who make their faith active in love through ministries of compassion and justice.

So if you are done with “evangelical” but resonate with what you’ve read here, let me suggest that you learn more about Pietism — and perhaps even buy a copy of our book when it comes out next year.

3 thoughts on “Done with “Evangelical”? Maybe You Should Try…”