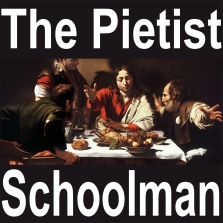 • It’s not really the most important thing that happened this week, but nothing was more exciting for me than for season 2 of The Pietist Schoolman Podcast to premiere! We seem to have had good listenership so far… but we’ve yet to receive any comments. If you listen, please do take the time to respond — the whole idea of the season is to sustain a conversation with our audience that will shape the book we’re writing!

• And if you’re a history buff who enjoys podcasts, be sure to check out John Fea’s newest enterprise.

• Meanwhile, the Wheaton story continued to develop. The announcement that the school’s provost had recommended her termination prompted Larycia Hawkins to warn that “no one is safe.”

• And I was prompted to offer a 2500-word interpretive schema for evangelicalism. (Which prompted one commenter to ask a really good question: do we really need to “define what it ‘takes’ to be an evangelical”? I’d rather hear from more of you on that thread before I say anything…)

• Epiphany got me thinking what the Magi might have to teach Christian scholars, and New Year’s had me thinking about abundance and gratitude.

• Are men leaving the church because it’s not intellectual enough?

…There (#BLM and InterVarsity)…

• A big story that I’ve been unable to address in between taking a post-Christmas break and then blogging so much about other things this week: the evangelical organization InterVarsity gave a prominent platform to the Black Lives Matter movement during the Urbana 15 youth conference.

• Perhaps the wisest response came from Efrem Smith, who thought that “There are moments when evangelicals need to be pushed to a place of discomfort and even disagreement in order to forge a more biblically authentic ministry model for advancing the Kingdom of God.”

• Not all evangelicals were thrilled to see InterVarsity take this step, prompting Ed Stetzer to share some important reflections on racial justice and how we conversations about it and other difficult subjects.

• And John Inazu concluded that “Evangelicals should be able to find common ground with other people and other causes without being accused of (or thinking it requires) complete alignment with those people and causes.”

…and Everywhere (Other Links)

• I could fill a whole TWTWTW post with links to people commenting on the #DocHawk case at Wheaton. Let me recommend just four more: Noah Toly became the first Wheaton prof to speak out, with a long, thoughtful reflection; Matthew Arilden’s defense of Wheaton rejects my argument that evangelicalism is best understood in light of its long, complicated history; Alex Wilgus took the historical context seriously, but suggested that theological liberalism is crucial to defining evangelicalism (and thanks to Alex for going back-and-forth about this and other ideas over at Twitter yesterday!); and Roger Olson was kind enough to respond to the questions I asked after Hawkins’ news conference.

• If he hadn’t gone into politics, Barack Obama might have made a fine literary critic.

• Eve Tushnet offered a fascinating review of Lin-Manuel Miranda’s widely acclaimed musical Hamilton. Hard to pull out a single, representative line, but here’s one to mull over: “If the American founding was mostly a romance then we have simply and colossally betrayed our chaste beloved.”

• Watching from afar via folks like John Fea and his small army of reporters, I’m regretting not attending this year’s meeting of the American Historical Association. For example, one panel revisited a question I often grapple with: does one need military experience to write military history? (Or its analogues in other fields.)

• One of my favorite fellow Christian historians interviewed another, as Jonathan Den Hartog had some questions for John Wilsey about his new book on American exceptionalism.

• Bad news for history departments: from 2013 to 2014, 9% fewer American college students graduated with a History major, a far bigger drop-off than what any other humanities or social science field experienced.

• A new book going behind the scenes of graduate admissions at leading universities leaves even less eager than ever to encourage students to go for a PhD.