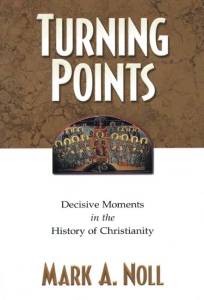 On Sunday I’ll be back at Calvary Church in Roseville, MN, teaching the second of six classes in an adult Sunday School series entitled “Turning Points: Global Christianity in the 20th Century.”

As I explained to everyone last Sunday, I’m borrowing a concept from Mark Noll, who suggests that “One of the most interesting ways to grasp a general sense of Christian history (though there are many others) is to examine critical turning points in that story.” While the selection is inevitably subjective (since it “depends upon what the observer considers to be most important”), it can “bring some order into a massively complicated subject” while still allowing us “to linger over specific moments so as to display the humanity, the complexity, and the uncertainties that constitute the actual history of the church….” (Noll, Turning Points, 2nd ed., p. 12).

(As he explains in his recent memoir, Noll’s approach originated during his first trip to Romania, in the summer of 1989. “Because we could not bring notes or other teaching aids” into the still-Communist country, “I had to come with only a few numbers scratched on an index card—70, 325, 381, 451, 800, 1054, 1517, etc.—as an outline indicating important dates in church history” — From Every Tribe and Nation, p. 81.)

In the first two editions of Noll’s Turning Points, he largely avoided the twentieth century. While his list of twelve ends with the 1910 World Missionary Conference in Edinburgh, that event is included more as a culmination of the 19th century. (And I’d argue that the twentieth century, as a distinct historical period rather than a round number, really begins in 1914.) The 2nd edition suggested a number of potential 20th century turning points, two of which — the Second Vatican Council and the 1974 Lausanne Congress — became a new chapter in the 2012 update of the book.

But I suggested to the class’s planners that we’re now far enough into the 21st century that we might begin to look for a longer list of turning points in the 20th. And because of the age of my students — sixties, seventies, and above — we could spend much of the first, introductory session talking about their own memories of the 20th century… and how “thinking historically” about the past is different than remembering it.

This Sunday we’ll jump in to our set of five 20th century turning points with World War I. It’s an obvious choice for someone with my interests, even though I’m not sure the war serves as the “fork in the road” or signal of a “new stage in the outworking of Christian history” that Noll sought for his chapters. Rather, the war produced a variety of complicated, even contradictory effects for Christianity.

(In a play on the “turning point” theme, I’ll open with the first lines of W.B. Yeats’ 1919 poem, “The Second Coming“: “Turning and turning in the widening gyre / The falcon cannot hear the falconer….”)

Then next weekend we’ll move back a few years, to the Azusa Street Revival, and talk about the growth of Pentecostalism and Charismatic movements.

Vatican II will no doubt claim one week at the end of October or the beginning of November, which leaves two sessions that are somewhat up for grabs.

So let me poll readers:

If you had to name two more “turning points” in global Christianity in the 20th century, what would they be?

The global dimension is really important… When I asked students to come up with a list of the ways that Christianity has changed most significantly in their lifetimes, they focused almost entirely on the church in America. But without much question, the most striking change in Christianity in the 20th century is the shift of its center from North to South. So I’d like at least one of the remaining events to help explain that change.

8 thoughts on “What Are Turning Points in the Global History of Christianity in the 20th Century?”