One of the blessings of getting caught up in the ongoing debate over the future of Christian higher education is that I’ve been prompted to learn more about Myron Augsburger, the former president of both Eastern Mennonite University and the Council for Christian Colleges & Universities (CCCU). With the latter a week away from deciding whether the former will continue to be one of its members, I’m happy to welcome Sider Institute director Devin Manzullo-Thomas back to the blog to tell us more about Augsburger and the “Mennonite history” of the CCCU.

Next Monday marks the official end of the “deliberative and consultative process” in the Council for Christian Colleges & Universities that began back in July, after two CCCU member schools — Eastern Mennonite University and Goshen College — changed their nondiscrimination policies to allow the hiring of gay and lesbian faculty. After hearing from its 120 presidents, the CCCU plans to hold a special conference call on the 21st to determine its course of action.

The CCCU’s process has been too slow for some more conservative members, including Union University and Oklahoma Wesleyan University, which withdrew their memberships. Union’s president claimed that Goshen and Eastern Mennonite had “abandoned fidelity to God’s word” with their policy change, and that no amount of dialogue among CCCU leaders would keep him and his institution inside the organization. A cadre of similarly conservative institutions have threatened to follow a similar route.

Both supporters and detractors have dissected the whys and hows of the CCCU’s process. While conservatives have tended to reject dialogue as unnecessary or even a stalling mechanism, CCCU supporters – including The Pietist Schoolman himself [ed. Call me Chris] – have pointed to the biblical call to Christian unity as one reason for engaging in an ongoing conversation, rather than jumping to expulsion and sanction.

But there’s another rationale for the CCCU’s conciliatory route. As one perceptive Christianity Today report noted:

While brief, this statement alludes to an important — though little-known — aspect of the CCCU’s past. Unpacking what I call the “Mennonite history” of the CCCU offers us some further context for an ever-deepening “crisis.” It also proves that evangelical and Anabaptist cooperation and tension have long been a part of the CCCU’s history.

The place to begin is with the Mennonite mentioned in the CT article.

Myron Augsburger has been a fixture in both Mennonite and evangelical circles for the last 60+ years. Born in 1929 in Elida, Ohio, Augsburger’s early career focused more on his call to pastoral and evangelistic ministry in the Mennonite Church than on higher education. He was a minister in Florida (1951-1953) and a well-traveled evangelist (1955-1962), modeling a Mennonite appropriation of the revival style of Billy Graham and other neo-evangelical leaders.

It wasn’t until the early 1960s that Augsburger completed his doctoral training at Union Theological Seminary in Richmond, Virginia and returned to his undergraduate alma mater — then called Eastern Mennonite College — as a professor of theology. In 1965 he accepted the invitation to serve as Eastern Mennonite’s president. He was only 35 at the time, making him the youngest president in that school’s history.

And yet his presidency coincided with a period of sustained geographic growth on the Eastern Mennonite campus. Successful fundraising campaigns for a new science building, the school’s first free-standing library, a discipleship/worship center, and a new chapel all occurred during Augsburger’s presidency. Moreover, Augsburger’s ties to the broader evangelical community — through his friendship with Billy Graham and his leadership roles in the National Association of Evangelicals (NAE) — drew the small Mennonite college into the orbit of a growing, postwar transdenominational evangelical movement.

In fact, Augsburger became a recognized advocate for peace and justice concerns within the evangelical movement. As Mennonite historian Paul Toews observes, Augsburger

was an influential Mennonite voice in the NAE. After attending the 1962 convention he decided that the NAE was more likely than the [liberal Protestant National Council of Churches] or the World Council of Churches to take a strong position against violence. (Mennonites in American Society, 1930-1970, p. 223)

One effort to get evangelicals to take such a stance was a 1967 interdenominational seminar, “Evangelicals in Social Action Peace Witness.” Organized by Augsburger and held on Eastern Mennonite’s campus, the seminar drew together Mennonite intellectuals as well as evangelical leaders like former NAE president Paul Rees and Denver Theological Seminary president Vernon Grounds.

Another effort that drew evangelicals and Mennonites together: the formation, in 1971, of the Christian College Consortium (CCC). Conceived as a cooperative venture between a denominationally diverse mix of “faith-affirming” colleges, the CCC existed to “promote the purposes of evangelical Christian higher education in the church and in society,” according to its earliest mission statement. And although financial obligations ultimately led to its departure in 1978, Eastern Mennonite was a founding member of the CCC, and Augsburger an active participant in its gatherings.

Five years later, in 1976, the CCC helped to found a larger parallel association, the Christian College Coalition — now known as the Council for Christian Colleges and Universities (CCCU). Founded as a federal lobby for Christian higher education, the agency established a headquarters in Washington, DC, and gave oversight to an off-campus learning initiative, the American Studies Program, jointly sponsored by its member schools. Once again, Eastern Mennonite — with Augsburger still at its presidential helm — was a founding member.

Augsburger and Mennonites like him never got Billy Graham to commit to nonresistance; Eastern Mennonite’s presence in the CCC and the CCCU did not stem the tide of Christian nationalism that swept many evangelical college and university campuses during the Vietnam War years. Yet by the late 1960s and 1970s, as scholars like David Swartz and Molly Worthen have shown, younger evangelicals were increasingly attracted to the Mennonite peace witness. Augsburger was a sought-after speaker among such evangelicals. And he pressed his fellow Mennonites and Brethren in Christ to engage evangelicals in a similar way:

There is a new discovery today among persons who call themselves evangelical . . . They are discovering that it is entirely possible to say that one is conservative in his theology and at the same time liberal in his politics and social concerns. . . . If there is any group which has the chance right now to demonstrate [a concern for peace and justice issues], it is those of us within the [Anabaptist-Mennonite] constituency. . . . Because of our emphasis on discipleship, I think we can hold the Gospel and social service together, instead of letting the two be divorced. (Evangelical Visitor, March 10, 1970, pp. 5-6)

By 1980, the year in which he resigned from the Eastern Mennonite presidency, Augsburger was — in the words of CCCU historian James A. Patterson — “a well-known figure in both the evangelical world and Christian higher education.” So it came as little surprise that, in 1987, the CCCU invited Augsburger to serve as its third president. 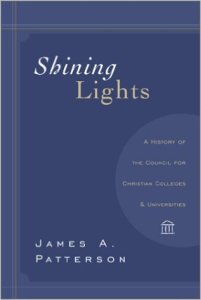 Writing in Shining Lights: A History of the Council for Christian Colleges and Universities, Patterson describes Augsburger’s presidency (1988-1994) as introducing “prophetic and global impulses” to the CCCU agenda. Under Augsburger’s tenure, the CCCU launched its Film Production Studies Program as well as cross-cultural programs in Russia, England, and the Middle East. Augsburger also spearheaded an effort to increase educational opportunities for racial and ethnic minorities at CCCU schools. And according to Patterson, he helped to articulate a mission for Christian higher education, pointing

to the need for curricular materials that would grapple with “human rights and justice issues”; he also spoke forcefully of moving beyond American parochialism “to help our nation find a place of compassion in the global community.”

Moreover, Augsburger laid out the social mandate for Christian colleges and universities. In his own words, from 1993:

Christian colleges should act in society as agents of social justice. The Christian liberal arts college does not combat racism, sexism, materialism and violence by the singular message of the gospel alone, but by the breadth of cultural values of equity, love and justice as they are enriched by Christian dialogue.

Augsburger also brought a prophetic voice to the CCCU. Although he self-identified as an evangelical, he also critiqued the limitations and liabilities of the movement — even at a time when the Religious Right was ascendant and waging what Andrew Hartman has called “a war for the soul of America.” Patterson notes:

Augsburger argued that the [evangelical] movement had become a “sub-culture” or an “ethnicity” that exhibited some serious limitations. He specifically mentioned individualism, pietism, privatism, nationalism, inerrancy of word (versus inerrancy of meaning), a Greek view of personality, and Aristotelianism as the besetting sins of many American evangelicals.

In assessing Augsburger’s time as CCCU president, however, Patterson notes significant tensions. Some CCCU schools worried about Augsburger’s “pacifist orientation” and the ways that his theology influenced CCCU programs during that time, especially the American Studies Program. Others balked at his overt critique of evangelicalism. And Patterson himself criticizes Augsburger for the way his “Anabaptist roots militated against an aggressive involvement in lobbying and public policy endeavors in the nation’s capital,” a keystone of the CCCU president’s work up to that point.

Altogether, Augsburger’s experiences — as a Mennonite voice among neo-evangelicals, as the president of a charter CCCU school, and later as the CCCU’s third president — underscores the Mennonite dimensions of the CCCU story. Like the many other encounters between Anabaptist-Mennonites and evangelicals throughout the twentieth century, Augsburger’s leadership was sometimes fraught with controversy and undoubtedly peppered with critique.

This brief history shows that Mennonites and evangelicals in the CCCU have always coexisted in creative tension—cooperating and yet also critiquing. Such a reality puts the present “crisis” into perspective. It is not a rupture from historical norms; in fact, the current controversy reflects earlier periods of discomfort and disconnect among evangelicals and Mennonites. And yet, at the same time, the traditions have stayed together, navigating diversity while maintaining unity.

As CCCU leaders enter the last stage of their deliberations, they would do well to keep this history in mind.

2 thoughts on “A Prophetic Impulse: Myron Augsburger and the Mennonite History of the CCCU (Devin Manzullo-Thomas)”