This 4th of July weekend I’m feeling more patriotic than I have in years, thanks to two speeches by Pres. Obama. 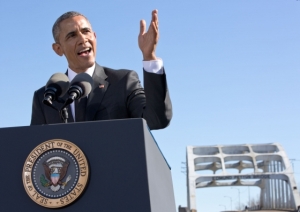 First, his speech this past March at the Edmund Pettus Bridge in Selma, Alabama. Obama remembered the civil right activists who fifty years earlier had been brutally attacked during their peaceful march to Montgomery:

As we commemorate their achievement, we are well-served to remember that at the time of the marches, many in power condemned rather than praised them.  Back then, they were called Communists, or half-breeds, or outside agitators, sexual and moral degenerates, and worse — they were called everything but the name their parents gave them.  Their faith was questioned.  Their lives were threatened.  Their patriotism challenged.

But, the president argued, those whose patriotism had been questioned actually lived out a superior understanding of love of country:

And yet, what could be more American than what happened in this place? What could more profoundly vindicate the idea of America than plain and humble people — unsung, the downtrodden, the dreamers not of high station, not born to wealth or privilege, not of one religious tradition but many, coming together to shape their country’s course?

What greater expression of faith in the American experiment than this, what greater form of patriotism is there than the belief that America is not yet finished, that we are strong enough to be self-critical, that each successive generation can look upon our imperfections and decide that it is in our power to remake this nation to more closely align with our highest ideals?

This is a country that I can love: one that is “not yet finished.”

What “it means to love America,” Obama explained later in the speech, is to remember that “We broke the old aristocracies, declaring ourselves entitled not by bloodline, but endowed by our Creator with certain inalienable rights.  We secure our rights and responsibilities through a system of self-government, of and by and for the people. That’s why we argue and fight with so much passion and conviction — because we know our efforts matter. We know America is what we make of it.”

But lest we think that such work is entirely within our human abilities — the inheritance of our roots in the Enlightenment — the president more recently emphasized another, less secular theme in another, even greater speech: 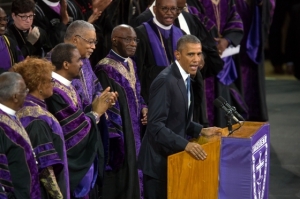 As a nation, out of this terrible tragedy, God has visited grace upon us, for he has allowed us to see where we’ve been blind.  He has given us the chance, where we’ve been lost, to find our best selves. We may not have earned it, this grace, with our rancor and complacency, and short-sightedness and fear of each other — but we got it all the same.  He gave it to us anyway.  He’s once more given us grace.

Given the pulpit at the memorial service for Rev. Clementa Pickney, the South Carolina pastor shot (alongside eight of his parishioners) by a young white supremacist during an evening Bible study, Pres. Obama preached a sermon on grace, that gift of God that “is not earned. Grace is not merited. It’s not something we deserve. Rather, grace is the free and benevolent favor of God as manifested in the salvation of sinners and the bestowal of blessings.” Even in the midst of so terrible a tragedy, the president reflected, God was mysteriously transforming the blinding hatred of a murderer into “big-hearted generosity and, more importantly… a thoughtful introspection and self-examination that we so rarely see in public life.”

It wasn’t a transformation that we had earned (here again, I recommend Jay Case’s reflection on grace and justice), that we could have accomplished in our own strength, but “it is up to us now to make the most of it, to receive it with gratitude, and to prove ourselves worthy of this gift.” Grace, by this reckoning, is an invitation to cooperate in the work of improving an experiment in self-government that “is not yet finished.” It renews a love of country that can’t exist as a kind of abstract affection for a pristine, distant ideal but must be lived out in sacrificial service to our neighbors.

While his singing of “Amazing Grace” got well-deserved attention, it’s noteworthy that Pres. Obama ended the eulogy by quoting another famous song: “May God continue to shed His grace on the United States of America.”

So this Independence Day, sing “America the Beautiful” with whatever love you have for a nation that is not yet finished: one whose good is not yet crowned with brotherhood, whose cities brim with human tears. Sing it as a prayer that God would mend our every flaw by shedding his grace, once again, on us.