Today is the 4th anniversary of the founding of this blog. Come back Monday for a look back; meanwhile, here’s what was making news in the last week of our fourth year:

• Thomas Kidd and Barry Hankins might have written the best history of Baptists in this country… but here’s what they missed about the Baptists I know best.

• I didn’t have the words to blog about the shooting at the Emanuel African Methodist Episcopal Church in Charleston, South Carolina. But Jon Stewart did:

• “It is impossible to see the attack on Emanuel apart from the church’s history,” or the state’s, so check out the #CharlestonSyllabus hashtag for further reading.

• At least as of this morning, the Confederate flag is still flying in front of the South Carolina capitol. Here’s why we should be appalled by that. And if a historian’s argument doesn’t convince you, listen to a Southern Baptist: “The cross and the Confederate flag cannot co-exist without one setting the other on fire.”

• Has a papal encyclical ever received so much attention? At least in my limited memory, nothing quite compares to Laudato si’. Mostly drawing attention for his warnings about climate change, Pope Francis’ underlying theology and “moral ecology” drew the notice of more subtle religion reporters like Emma Green and Elizabeth Bruenig.

• Groundbreaking as it seems, Ruth Graham reminded the readers of Slate that “Francis’ environmentalism fits perfectly into Catholic history.”

• Rusty Reno even claimed that Laudato si’ is the “most anti-modern encyclical since the Syllabus of Errors, Pius IX’s haughty 1864 dismissal of the conceits of the modern era.” New Yorker writer Elizabeth Kolbert found the encyclical “an unsparing indictment of just about every aspect of modern life.”

• Based on previous polling, one group seems least likely to embrace the pope’s recommendations: evangelicals, only a quarter of whom think global warming is caused by humans.

• Why are so many evangelicals so suspicious of environmentalism (particularly when it leads to policy prescriptions)? Mark Stoll considered theological and historical explanations.

• At least among those evangelicals, the other big religion story early in the week was the death of Elisabeth Elliot, the missionary who told the story of her husband’s martyrdom in Through Gates of Splendor and then returned to South America to minister to the same people who had killed him. Among those remembering this remarkable woman was Kay Warren: “Elisabeth, thank you for shaping me into the woman I am, for modeling for me what it looks like to follow hard after Jesus, for never walking away from God in your darkest days and for holding true to your faith to the end. Thank you on behalf of millions of other women – young and old—who found in you a woman worthy to emulate. Your humble sense of self would instantly push this praise aside, but please know we only follow in your footsteps because you follow our Master.” 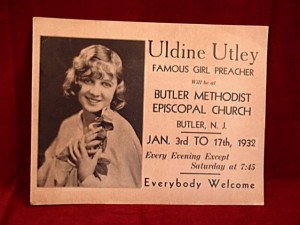 • The New York Times had a fascinating report on child preachers in Brazil, prompting John Turner to point out that the phenomenon hasn’t been unknown in this country’s religious history.

• If evangelicals are starting to change their minds on human sexuality, it may have less to do with supposed conformity to culture and more with a larger shift in how they read the Bible.

• From someone on the other side of that debate: Jason Byassee both critiqued common arguments for greater inclusivity and suggested, “as a sort of theological conservative, how liberals on this topic ought to argue to try and convince someone like me.”

• Someone was asking me last week about Franklin Graham, who famously encouraged evangelicals to join him in boycotting LGBT-friendly business, and I dismissed him as having a fraction of the influence of his famous father. Perhaps I was wrong: “In an era where Facebook has become a primary filter—in many cases, the primary filter—for what people pay attention to online, Graham is building a Facebook presence that surpasses every other vocal Christian leader in America.”

• About nine months after being “derecognized” by the California State university system because it requires faith commitments of its leaders, InterVarsity regained its status at those nineteen campuses.

• For a long time, notes Andrew Delbiano, there was bipartisan support for initiatives that would “bring college within reach of those for whom it would be otherwise unattainable…. Today this story is stalled,” with the higher education system “reflecting the stratification of our society more than resisting it.”

• Three years ago I noted that the proposed Dwight Eisenhower memorial in Washington, DC was getting lots of flack… Nothing has changed.

• Cool random link of the week: a fan letter from Walker Percy to Bruce Springsteen… with a belated response from the singer.

4 thoughts on “That Was The Week That Was”