Hagiography is not a term that most Western academics dream of seeing in reviews of their work, but historian Rick Kennedy meant it as a plaudit when he dedicated his recent Christian Scholar’s Review essay to an “emerging genre” he termed the “new academic hagiography”:

In this New Hagiography the author must try to analyze methodically while believing. Unthinking piety has to be avoided, but reasonable empathy, even responsible apology, is encouraged. No longer compelling are old methods of analysis based upon suspicion or psychological theories. Experiments with new methods are encouraged. “I decided,” writes Grant Wacker about his search for a method, “that I would have to proceed as my grandmother proceeded onto freeways: buckle up, close your eyes, and just do it”… (p. 294)

Ostensibly focused on recent biographies of two evangelists — Thomas Kidd’s of George Whitefield and Grant Wacker’s of Billy Graham — Kennedy’s essay also placed books on Francis Schaeffer (by Barry Hankins), Francis Asbury (John Wigger), and Charles Hodge (Paul Gutjahr) in a line originating with George Marsden’s award-winning Jonathan Edwards: A Life. Kennedy’s own new biography of Cotton Mather doesn’t come out for a month, but given his consistently positive appraisal of this “new academic hagiography,” I suspect its emphases will inform his own work. Let me cluster them in pairs and offer some comments and questions:

A reverent tone and “responsible critical analysis”: “Certainly good biographies have long tried to be empathetic as authors try to get into the heads of their subjects. But what characterizes Kidd’s and Wacker’s books is a reverent tone that God really is at work in the life of the subject” (297). To be sure, this kind of biography acknowledges that “Saints are sinners too” (302), so Wacker calls out Graham for being less than truthful about his use of ghost writers and Kidd doesn’t shy away from Whitefield’s holding of slaves. Still, they “know quite well that many university-trained readers will be skeptical and suspicious, but neither feels obliged to use skepticism or suspicion as the default viewpoint of an academic book” (297-98). 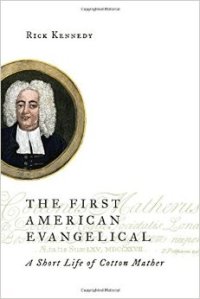 “Epistemological populism” and a “New Emulation”: Second, then, these “new hagiographers” pay heed to the “wise and discerning common-sensibility of credible people” who, in following the likes of Whitefield and Graham, were more likely “astute and intelligent rather than easily duped” (299). And the populism that undergirds the epistemology of these books (reflecting an openness “to a wider range of social evidence,” like “the testimony of crowds”) also flavors the way they’re written: “The academic credentials of each book are manifest… but the hope of Christian instruction in each of these books is palpable. The authors want their readers to imitate the Christian character of their subjects” (304).

Kennedy closes by noting that all of the “new hagiographers” have some connection to the Conference on Faith and History, which he now serves as secretary and previously served as president. Indeed, Kennedy’s observations reminded me of two presentations given at the 2012 CFH meeting at Gordon College:

• When faced with evidence from believing eyewitnesses (like the Shakers she studies) describing supernatural occurrences, Mormon historian Rachel Cope advocated a “hermeneutics of trust” instead of a “hermeneutics of suspicion.” Or perhaps the “hermeneutics of generosity” attributed by Stuart Parker to Richard Bushman, whose reverent biography of Joseph Smith appears in this section of Kennedy’s essay.

(Such an approach seems to run through John Turner’s biography of Smith’s successor, which reports Brigham Young’s revelations and charismata as they were encountered and interpreted by his followers — and his contemporary critics. The non-Mormon Turner isn’t reverent about Young and so doesn’t quite fit Kennedy’s genre, but he is extraordinarily fair-minded about a most difficult subject.)

• Then the “populism” of Kennedy’s “new hagiography” evoked part of former CFH president Tracy McKenzie’s call for Christian historians to take up their “vocation to the church” and communicate more effectively with general audiences who share their faith. And part of that requires a different kind of tone, as John Fea elaborated in his comment on McKenzie’s speech:

Academically trained historians must teach the church with care and sensitivity.  For example, they cannot go into an adult Sunday School class and start dropping historiographical bombs in an attempt to kill off cherished myths about the past.  Such a practice may be quite common at academic conferences and history graduate programs, but it will only alienate a church audience.  In fact, I would even argue that sometimes historians speaking to church audiences must be willing to listen and converse before debunking and correcting false understandings of the past.  They must gain trust by behaving more like a Christian than an academic.

So I’m interested to see if Kennedy’s description of (and evident enthusiasm) for the “new academic hagiography” resonates with fellow CFH members and other Christian historians — or with non-academic readers who nonetheless are interested in biographies are written.

But I also wonder if what he observes is limited to the relatively narrow genre he describes:

• Could the reverence, “responsible” criticism, and populism of these biographies translate to works of history? Denominational and other institutional histories, for instance? (I wonder if Kidd and Hankins approached their history of America’s Baptists in the same way they told the stories of Whitefield and Schaeffer…)

• And couldn’t there be a secular version of this “new hagiography”? As it happened, I recently stumbled across John Gaddis’ Pulitzer-winning biography of George Kennan, which closes with the biographer extolling multiple versions of the subject’s “greatness.” Even if Gaddis’ characterization of Kennan as a “man of deep faith” is more incidental than central to the narrative, I suspect there’s at least a secular version of “reverence” and “emulation” at work…

One thought on “Is (Responsible, Thoughtful) Hagiography Coming Back?”