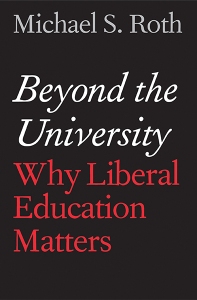 One of the ablest defenders of the liberal arts, in a time when many question their value, is Wesleyan University president Michael Roth. Indeed, before becoming an administrator, Roth was trained as an intellectual historian, and he still finds time to teach in that field.

Last month he wrote an essay for the Wall Street Journal probing his students’ hesitation whenever he tries to introduce religion into a discussion of the history of ideas:

It happens every year. In teaching my humanities class, I ask what a philosopher had in mind in writing about the immortality of the soul or salvation, and suddenly my normally loquacious undergraduates start staring down intently at their notes. If I ask them a factual theological question about the Protestant Reformation, they are ready with an answer: predestination, faith not works, etc.

But if I go on to ask them how one knows in one’s heart that one is saved, they turn back to their notes. They look anywhere but at me, for fear that I might ask them about feeling the love of God or about having a heart filled with faith. In this intellectual history class, we talk about sexuality and identity, violence and revolution, art and obscenity, and the students are generally eager to weigh in. But when the topic of religious feeling and experience comes up, they would obviously just prefer that I move on to another subject.

Roth, who describes himself as a secular Jew, wonders why his students are so reluctant to engage in this act of historical imagination. Even those of his students who are Christian (and “might readily speak to this experience in another setting”) are “uncomfortable” in such discussions.

It leads him to make the case for empathy as an essential component of history:

As a historian, I want my students to learn concrete things about major events and daily life in the past, but I also want them to go beyond the facts and try to imagine how it felt to be at a certain time and place; I want them to participate imaginatively in the past while recognizing that this creative act can never be accomplished fully.

Which is exactly right. (I’ve written often about the importance of empathy to the practice of history — e.g., here.)

But it was actually an earlier, passing qualification that stuck with me:

I’m not trying to make a religious believer out of anybody, but I do want my students to have a nuanced sense of how ideas of knowledge, politics and ethics have been intertwined with religious faith and practice. (emphasis mine)

Now, I want my students to have a similarly nuanced sense of such intertwinings in the fields I teach, but as a Christian historian, am I not I called to make believers out of my students? (Or, teaching as I do at a school with a faith screen, to deepen that belief?)

I started to write a brief response to that question, but it’s already too long to include with this post. So I’m going to bite my tongue for the moment, cut this post short, and first invite comments from my readers.

Should Christian historians seek to “make a religious believer” out of a student? Why or why not? (And if yes, how would this happen? Does it mean you approach teaching history differently than secularist peers like Roth?)

3 thoughts on “Am I “Making Religious Believers” Out of My Students? (part 1)”