Whatever concerns I have about how Angelina Jolie brings Louie Zamperini’s story to the screen, I’m less interested in discouraging movie-going than in encouraging book-buying. If you haven’t read it yet, I heartily recommend Laura Hillenbrand’s Unbroken, based on extensive primary source research and numerous interviews with Zamperini (who died earlier this year, four after the book came out).

Also the author of the better-than-its-movie Seabiscuit, Hillenbrand is an uncommonly gifted writer, one of new generation of authors who have rejected the excesses of the New Journalism — as Wil Hylton explains in a wonderful profile of Hillenbrand published last weekend:

They still built stories around characters and scenes, with dialogue and interior perspective, but they cast aside the linguistic showmanship that drew attention to the writing itself….

As much as any author working today, Hillenbrand embodies this stylistic discipline. She writes with the calm confidence that the careful arrangement of facts and details can impart the same narrative urgency as kandy-kolored adjectives and verbal pirouettes.

(Hylton’s piece is also an excellent introduction into Hillenbrand’s own remarkable story, skipped here for space.)

There’s much to praise in Unbroken the book, but given what’s missing from Unbroken the movie, I’m all the more impressed by the last act of Hillenbrand’s tale. Having offered an unflinching account of Zamperini’s trying postwar years, she comes to his encounter with Billy Graham in 1949 Los Angeles and tells as convincing a conversion story as any I’ve read.

As characterized by Hillenbrand, Graham was neither “the sort of frothy, holy-rolling charlatan that [Louie had] seen preaching near Torrance when he was boy” nor a spiritual superhero. But he was an amazingly effective preacher. As Zamperini listened to two Graham sermons (this one, and this one), the veteran journeyed from “indignant rage” to self-realization (“I am a good man, he thought. I am a good man. Even as he had this thought, he felt the lie in it. He knew what he had become”). Even so, he felt “accused, cornered, pressed by a frantic urge to flee… enraged, violent, on the edge of explosion” before coming to the moment of decision, when “He felt supremely alive.”

Resting in the shade and the stillness, Louie felt profound peace. When he thought of his history, what resonated with him now was not all that he had suffered but the divine love that he believed had intervened to save him. He was not the worthless, broken, forsaken man that the Bird [a sadistic Japanese guard] had striven to make of him. In a single, silent moment, his rage, his fear, his humiliation and helplessness, had fallen away. That morning, he believed, he was a new creation.

The two interjections of “he believed” lend Hillenbrand some distance; this is Louie’s story, not hers. But while I don’t think she shares Zamperini and Graham’s faith, Hillenbrand demonstrates substantial empathy for it. Frankly, I’m not sure I’d want to watch Angelina Jolie attempt to bring this chapter to the screen.

So yes, if you think Zamperini’s story is incomplete without the conversion in the revival tent, save the cost of a movie ticket and buy this book on Kindle.

As I wrote yesterday, biographers clearly can’t attempt a full reconstruction of their subjects’ lives. They must pick and choose. But when he went to Graham’s crusade in Los Angeles, Zamperini was only thirty-two years old. He had twice as much of his life ahead of him as behind him, yet Hillenbrand has just over twenty pages left in her book. (And much of that is an epilogue that catches up with other characters, including Mutsuhiro “The Bird” Watanabe.)

I wouldn’t dispense with any of it (nor all the thick description that came before), but is the post-1949 part of Zamperini’s tale any less worthy of telling?

(I fear this post will collapse under the weight of such a comparison, but… Augustine of Hippo converted at almost the same age as Zamperini, yet his Confessions continue for five more books after he took up and read.)

Perhaps we should start by thinking about what it means to be converted… For many evangelicals, Hillenbrand’s account of Zamperini’s conversion fits a template that, if not normative, is at least privileged: after a long period of struggle, an individual seems almost irretrievably lost, but suddenly experiences a Damascus Road (or sawdust trail) epiphany producing instantaneous, dramatic change. As soon as Zamperini and his wife got home after Graham’s tent meeting, reports Hillenbrand, he drained his liquor bottles, threw away his cigarettes and “girlie magazines,” and stopped having nightmares about the Bird.

If Hillenbrand wrote it in that way, it’s likely because Zamperini told it to her in that way. In a 1976 oral history interview for the Billy Graham Center, he called his conversion “a complete turnabout…. I had a totally new direction of life and a whole new purpose.” Interviewed for the Billy Graham Evangelistic Association after Hillenbrand’s book came out, Zamperini reiterated the all-at-once nature of his conversion:

Zamperini did have nightmares in prison and nightmares at home until he received Christ at the Billy Graham Crusade. “That night when I got home from the Crusade, it was unbelievable. I didn’t have a nightmare, and I haven’t had one since,” he says.

One critic of the book found that hard to swallow. “I can’t understand how someone with severe PTSD could get over it in one night,” he wrote.

“The fellow obviously doesn’t know his Bible,” Zamperini says with a laugh. “When you accept Christ, you become a new creation. Old things are gone.”

Amen. But I’m enough of a Lutheran to believe that even newborn saints remain sinners. After all, even Christianity’s most famous convert continued to find that “I do not understand my own actions. For I do not do what I want, but I do the very thing I hate.” And Graham himself, introducing Zamperini at a 1958 crusade, emphasized that a significant number of the “inquirers” (or “seekers,” but not “converts,” since he didn’t think he could know their hearts fully) who came forward at his revivals “will not last.”

I trust that Zamperini’s conversion did “last,” but impressed as I was by Hillenbrand’s account of it, I came away interested in the chapters that weren’t written. Did he never face temptation again? Did he cultivate disciplines that helped him grow spiritually? (I’d love to hear Zamperini talk about Paul’s use of athletic imagery…)

I was especially curious about his sense of vocation. Was he comfortable quickly taking on a public role with Graham’s ministry? (Within a week or so, he was on the platform himself. Not even two months after his conversion, Zamperini’s own account was published in Youth for Christ Magazine.) Why, within five years, had he decided to focus his energies on a camping ministry?

Those aren’t questions Hillenbrand is interested in asking. She has said that she wrote Unbroken to explain how Louie could “forgive the unforgivable,” so it’s understandable why the book’s dénouement focuses on Louie’s attempts to reach out to his tormentors rather than, say, his work with Victory Boys Camp. (That receives three paragraphs, with Hillenbrand concluding, “He went easy on Christianity, but laid it before them as an option. Some were convinced, some not, but either way, boys who arrived at Victory as ruffians often left it renewed and reformed.”) 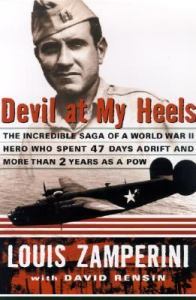 But I hope that if fellow evangelicals are upset by the Jolie film omitting Zamperini’s conversion, they will not only read Hillenbrand’s book but move on to Zamperini’s own memoir, co-written with David Rensin in 2003 (as a rewrite of a 1955 book also titled Devil at My Heels). It concludes with two chapters devoted to life after conversion. They add significant detail to his 1950 trip to Japan (e.g., that it was prompted by a challenge from World Vision founder Bob Pierce and included a visit to Hiroshima), tell of brief encounters with Cuban revolutionary Fidel Castro and L.A. gangster Mickey Cohen, and explain more fully his decision to start a camping ministry.

Perhaps most interesting, however, are Zamperini’s views on evangelism. Pressed early to make numerous public appearances, he found himself “back in the spotlight like in the old days—only altogether different.” While he rejected the accusation of some friends that he “[accepted] Christ for the publicity it brought,” he soon decided to step back and later grew wary of aggressive evangelizing:

The Great Commandment is that we preach the gospel to every creature, but neither God nor the Bible says anything about forcing it down people’s throats. If you go to the door and get rejected, you’re supposed to kick the dust off your shoes and move on, not try to kick down the door. Back when the Jesus freaks roamed Hollywood Boulevard accosting passersby, I thought their pressure tactics gave Christianity a bad name. I believe what the Bible says: many are called, few are chosen. That’s one of today’s big problems: we’ve got too many die-hard fundamentalists the world over. You can see the hate in their eyes when someone doesn’t agree with everything they say. A dangerous few go to terrible lengths, even violence, to spread their beliefs. I’ve met many people who rejected Christ, yet it’s always some guy trying to spread the Word who gets mad and madder because he believes he has to score a conversion, like it’s a game he has to win.

In the beginning I struggled with my own eagerness to spread the Word and sometimes tried too hard. But after a few frustrating and occasionally embarrassing encounters, I finally accepted the truth: the Bible says you can’t convert anybody. All you can do is plant the seed and water it, and God will grant the increase according to His will. (pp. 250-51)