So look what the U.S. Postal Service left on my doorstep yesterday! 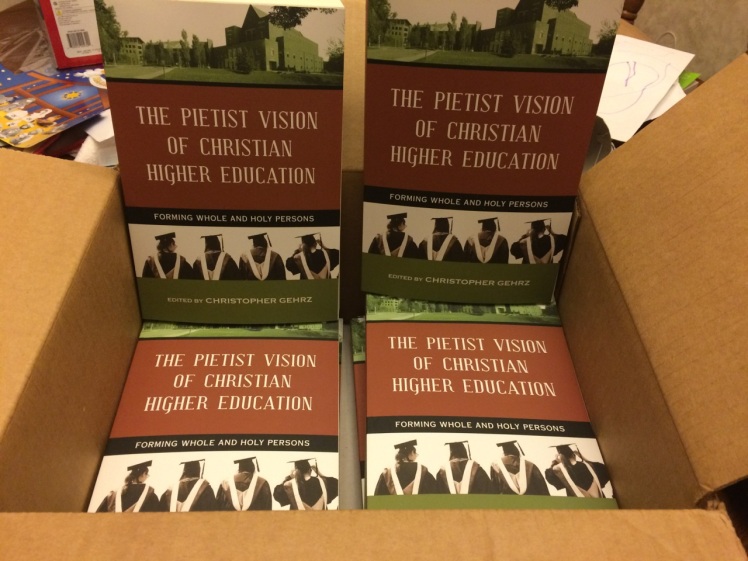 It’s still a couple weeks till our book on Pietism and Christian higher education is more widely available, but it was hugely gratifying to see and hold actual copies of something that I’ve envisioned for several years.

But getting my author’s copies also made me think again of all the people whose efforts made possible The Pietist Vision of Christian Higher Education. Indeed, one of the my favorite parts of the project was writing the acknowledgments section — also one of the hardest parts, since I had to force myself to keep it to no more than two pages.

So that they don’t need actually to buy a copy of the book in order to be thanked, here’s that section of the book:

I’m grateful to have had the chance to help bring this book into being, but I know full well that it wouldn’t have happened without the support, advice and hard work of many other people. A few of them I can acknowledge here, with apologies to those I’ve missed:

From the broader ecclesia: Jake and Rhonda Jacobsen first sparked my interest in seeking a “usable past” in Pietism for Christian scholarship and higher education. The National Network Board of the Lilly Fellows Program provided two grants that were essential to the development of this book. Jared Burkholder, John Fea, Devin Manzullo-Thomas, Tracy McKenzie and other members of the Conference on Faith and History have helped me understand what it means to be a Christian historian and a scholar for the church. The Evangelical Covenant Church has become again for me what it was in my childhood, a fellowship of “mission friends” such as Mark Pattie, Kurt Peterson, Steve Pitts, Glen Wiberg and the late Jim Hawkinson, all of whom embody the Pietist ethos of which we write in this book.

Then to the people, past and present, of my ecclesiola, Bethel University. Jay Barnes and Deb Harless have been ceaseless advocates of our efforts to seek a “usable past” in Pietism, and Deb Sullivan-Trainor and Barrett Fisher are the best deans one could hope to work for. Carrie Peffley was kind enough to offer feedback on the Lilly proposal that led to this book, and two of her colleagues in Bethel’s Humanities program, Dan Ritchie and Paul Reasoner, were among the many to offer feedback as we thought aloud about aspects of the Pietist vision for higher education. Keith Brooks opened up a substantial portion of the fall 2013 “Not Ready for Prime Time” series of faculty presentations for our contributors to offer previews of their work; Ann Gannon represented the Bethel Library well in making those presentations come off as well as they did. I couldn’t talk them into writing chapters, but Gary Long and Tim Essenburg also gave up two days of lovely June weather to sit inside a classroom for the workshop that launched this project; their questions, concerns, and suggestions no doubt have found their way into this book.

I’m lucky to be part of a department that’s as collegial as it is committed to teaching and service. I could write paragraphs about each of my fellow Bethel historians, but I especially need to thank three of them: Sam Mulberry, for inviting me to give a talk on innovation that inadvertently provided the organizing theme for this book’s conclusion; AnneMarie Kooistra, for her feedback on that conclusion; and Diana Magnuson, who, as the archivist of the Baptist General Conference and Bethel University, makes possible the work I do as a historian of Bethel. Several years apart from each other, my teaching assistants Taylor Ferda and Jacob Manning helped me, respectively, to research the history of the Brethren traditions and to proofread this manuscript.

Then to the contributors who did the real work on this book: thanks for helping launch this conversation and for letting me convince you to take time away from your own important work as teachers and scholars to think, talk and write about Pietism. Special thanks to Jan Curry, Roger Olson, Jenell Paris and David Williams for mentally revisiting your time at Bethel, having long since moved on to bigger and better things elsewhere. (Roger and David also physically revisited Bethel—David twice—to speak to our faculty about the themes in their chapters.) Sara Shady was kind enough to offer comments on the introduction and conclusion. Kent Gerber was tireless in passing along resources to his fellow contributors as he came across them in Bethel’s digital library. And Christian Collins Winn has been a wonderful partner on this, our fifth Pietism-related collaboration. (Among other things, Christian suggested that I get in touch with David Congdon, who has been as fine an editor as one could imagine; I’m grateful to him and the rest of the editorial team at IVP for taking a chance on this book.)

Finally, I’m most thankful to Katie, Isaiah, and Lena — for putting up with too much of me talking about Pietism and too little of me being a husband and father while I threw myself into this project. I’ll be home earlier than usual tonight.

Then one more, saved for the dedication page: 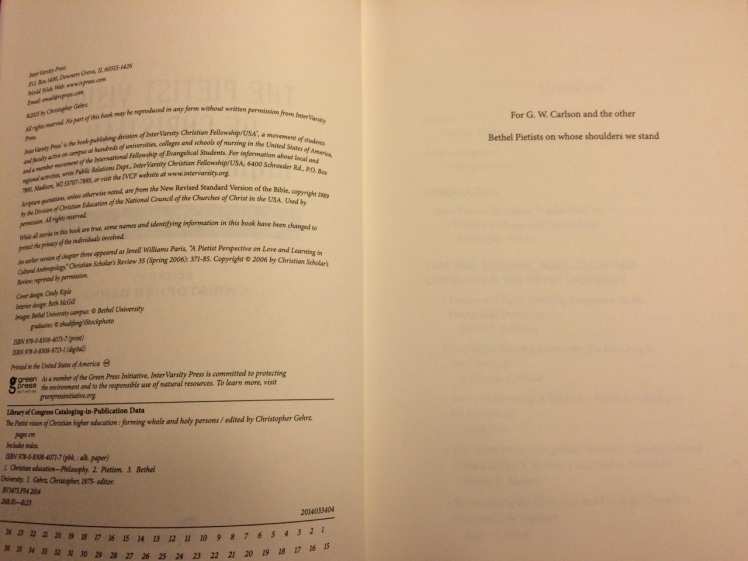 One thought on “Acknowledgments from Our Pietism Book”