I said it this morning on my Pietist Schoolman Facebook page, but it bears repeating for the larger audience that reads the blog itself: 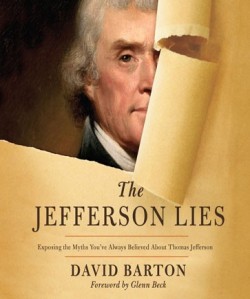 Within the evangelical world it’s hard to overstate the importance of this critique of David Barton, coming as it does from the president of the Conference on Faith and History and chair of the History Dept. at Wheaton College.

We’ve posted a bit here about The Jefferson Lies and the criticism Barton has received; you can learn more from Warren Throckmorton, John Fea, and Thomas Kidd, among others. Tracy McKenzie affirms their judgment that “as a piece of historical scholarship, the book is awful. I take no pleasure in saying so, but no other word will do.” But while that (coming from an evangelical historian of his stature) is significant, he goes much deeper.

I should add that Barton only enters the picture a third of the way through Tracy’s post, which is largely an expansion on one of the points he made in his brilliant The First Thanksgiving, that “There is a cost to using history primarily as a weapon” — e.g., in a culture-war debate over the role of Christianity in American origins. It not only leads us into inaccuracy, but feeds vices like pride and self-righteousness at the expense of virtues like humility and love of neighbor.

Bad enough as that is, Tracy argues that

there is something more important at stake than historical accuracy or our personal character.  In assessing whether our nation’s founders were Christian, we’re inevitably saying something as well about the Christian faith and Christ himself.  Stephen Nichols makes this point marvelously in his book Jesus: Made in America.  As Nichols puts it, when we exaggerate the degree to which the founders were Christian, we not only “do injustice to the past and to the true thought of the founders,” but we also do “injustice to Christianity and the true picture of Jesus.”

I read Nichols’ book over Christmas vacation, and his point finally convinced me to speak out about David Barton’s book, The Jefferson Lies: Exposing the Myths You’ve Always Believed about Thomas Jefferson (Thomas Nelson, 2012).   I had long hesitated to write about Barton’s contentious “scholarship.”  Numerous historians (several conservative Christian scholars among them) have already called attention to its numerous factual errors, half-truths, and misinterpretations, but it seems to me that Nichols’ point has somehow gotten lost in their critique of Barton’s historical claims.

Tracy primarily highlights two problems with Barton’s interpretation of Thomas Jefferson that have serious repercussions for Christianity in America:

First, by not only misusing evidence but dismissing his (academic) critics as liars — or, at worst, people duped by secular “-isms” — Barton promotes Christian anti-intellectualism:

Why is this a big deal?  It is a big deal because an important part of what historical interpretations teach us has little to do with the past  per se.  Our historical interpretations always contain a “teaching behind the teaching,” to borrow a phrase from Christian writer Parker Palmer.  Even when the “teaching behind the teaching” is not explicit, works of history are modeling to us a particular way of thinking about the past and of engaging with the present.  Even apart from its contentious claims about Thomas Jefferson, I shudder to think that my brothers and sisters in the Church are learning from books like The Jefferson Lies about what it means to love God with our minds.

Second, by insisting that Thomas Jefferson was, if theologically unorthodox, nonetheless “pro-Christian and pro-Jesus,” Barton is “separating our perceptions of Jesus from the historic, orthodox understanding of Christ embodied in the creed” and instead testifying to a kind of Jesus shaped in the image of the Enlightenment:

…Barton is not only making claims about Jefferson.  His findings reflect on Christianity, and what is more, they reflect on Christ.  For all of its gross historical flaws, what bothers me most about The Jefferson Lies is how its author–himself a former pastor–minimizes the gravity of Jefferson’s heresy.

It’s a long post — much as I’m quoting Tracy here, I’ve offered just a fraction of his argument — but well worth your attention. In the end, it forces us — scholars and non-scholars alike — to ask what kind of witness we’re offering.