Too much about higher education of late… Let’s cleanse the palate with a dose of military history! 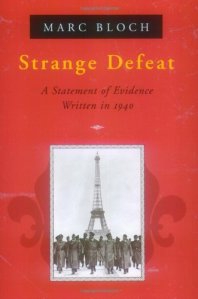 It was during my first year of college, when I had decided to forego my planned career in international law and instead devote myself to the study of European history, that I first realized how little of the pre-Pearl Harbor story of World War II that I knew. A professor introduced us to a small book called Strange Defeat, in which the French historian Marc Bloch examined how his country was defeated by Germany in the space of just six weeks.

As I continued on my studies, I came to understand Bloch’s significance within my discipline, not just as a specialist in the Middle Ages and founder of the Annales school, but as a philosopher of history. But that wasn’t the Bloch that I encountered as a college freshman. Strange Defeat was written in 1940 by a man who was fiercely proud of his nation — proud enough later to enter the Resistance and die at the hands of the Gestapo (while in prison he wrote “The Historian’s Craft,” still a touchstone for discussions of historical methodology) — but perplexed and ashamed by its defeat at the hands of the Wehrmacht.

Looking forward to the coming day “when this old and sacred soil of France, from which, in the past, so many harvests have been lifted—harvests of free thought and of judgement unrestrained—will once more burgeon into ripeness” Bloch nonetheless thought it essential to present his “witness” to “the most terrible collapse in all the long story of our national life” (p. 1). A veteran of WWI, Bloch watched the defeat of the French Army in 1940 from the vantage point of a 52-year old staff officer, and while he found much to criticize among his people and their institutions, he made no bones about the “immediate occasion” for the “strange defeat”: “the utter incompetence of the High Command” (p. 25), leaders whose hearts “were only too ready to despair of the country they had been called upon to defend, and of the people who furnished the soldiers they commanded” (p. 125).

He wasn’t kidding. Rereading Max Hastings’ description of the German offensive against the Netherlands, Belgium, and France that began on May 10, 1940, it’s staggering how poorly France’s military leaders performed — against a German force of which half were less than fully trained and more than one in four were middle-aged reservists — from even before the Battle of France began.

The French actually did better after that point, doubling the Germans’ daily casualty rate from May’s 2,500 to June’s 5,000. Charles de Gaulle’s pledge to fight on was not entirely isolated. Hastings tells the story of the cavalry school at Saumur, whose 780 instructors and cadets defended the Loire against repeated German attacks on June 19-20.

But Reynaud had already resigned in favor of WWI hero Philippe Pétain, whose plea for an armistice was granted by the Germans on the 22nd.

It was a defeat of staggering proportions not just for the French military, but for the French people, eight million of whom “abandoned their homes in the month following the onset of the German assault, the greatest mass migration in western European history” (Hastings, p. 59). Bloch explained the “timidity of the nation at large” partly by reference to the lingering effects of the First World War:

Everybody knew that the artistic heritage of the country had been cruelly mutilated, and our national prosperity to a large extent compromised. There was a feeling that it would be better to accept any humiliation rather than undergo a second time this twin impoverishment. It was a strange form of wisdom that did not even ask whether, in fact, there could be any worse catastrophe, for our culture or for the system of our economic life, than to let ourselves be conquered by a robber society. (Strange Defeat, p. 131)

Returning to a common theme from Inferno, Hastings argued that

The concept of conducting war à l’outrance, pursuing to the last gasp the destruction of the enemy, seemed to come naturally to Germans, as it did not to their British or French opponents. On the battlefield, Allied soldiers, reflecting the societies from which they were drawn, prided themselves on behaving like reasonable men. The Wehrmacht showed what unreasonable men could do. (p. 60)

Near the close of Strange Defeat, Bloch quotes Hitler: “It is very much better to bank on the vices of men than on their virtues. The French Revolution appealed to virtue. We shall be better advised to do the contrary” (p. 175).

(Or as one British airman put it, after having watched German fighters strafe refugees, ‘They are shits after all’ — quoted on p. 69.)

Which made it all the harder for a patriotic republican like Bloch to stomach that the so-called National Revolution brought to power a regime in Vichy that not only accepted France’s new role in German-ruled Europe, but actively collaborated with Nazi policies. Bloch professed himself unsurprised by the opportunism of the Right in June 1940: “No historian is likely to feel much surprise that the ‘Right-Wing’ parties should have been so over-prompt to acknowledge our national defeat.” But he struggled with the fact that France’s new leaders exhibited a “willingness to enter the continental system of Germany in the guise of vassals….

We can only assume that those of their leaders who were impelled by honest motives suffered from an almost incredible intellectual instability, and that among their faithful followers there was a no less shocking blindness to the antinomies of reason. (p. 150)

Next up: we’ll pick up the British story at Dunkirk and explore Hastings’ treatment of his country’s “finest hour,” when it stood alone against Nazi Germany.

4 thoughts on “The Second World War Before Pearl Harbor: France, 1940”