The timing couldn’t have been any better for us to arrive at the slender ‘P’ section in my music collection. But it would take considerably less of an excuse than an unlikely, two-decades-in-the-making reunion in Toronto to get me to listen to one of my favorite albums again…

The Replacements, Pleased To Meet Me 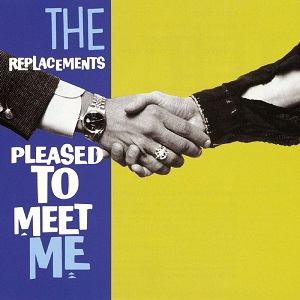 Okay, before I even start writing… A good number of my readers are wondering who I’m talking about. You all, take a moment to peruse:

Or, from a more persuasive version of the same exercise, just read this encapsulation of the story by Stereogum‘s Timothy and Elizabeth Bracy:

A ragtag band of misfits from an unfashionable outpost emerge from the punk-rock underground to become the unlikely practitioners of a great, raunchy, intelligent, and vulnerable sound that qualifies them for a time as nothing less than the American Stones. As their talents grow, so do their ambitions, but a fundamental contrariness and diffidence prevents them from behaving in even the semi-professional manner that the mainstream industry can trust with their investment dollars. As they chart a torturous one-step-forward, two-steps-back trajectory toward the grand mansion of rock stardom, there are (to quote Craig Finn) some massive highs and some crushing lows. There are casualties of every sort. And then, when the Replacements finally reach the doorstep of the grand mansion, they realize that the invitation was always illusory — they were never really getting in. And so, in a final series of disastrous concerts opening for the hugely popular commercial stalwarts Tom Petty & the Heartbreakers, they essentially ring the doorbell and run away.

Then warm up your Spotify and listen to:

And now (a) you’re welcome, and (b) you’re ready to talk about Pleased to Meet Me — which is either the moment when The Replacements finally put together an album whose performances, arrangements, and production were worthy of Paul Westerberg’s songwriting talents; or the moment when a band that had fired its substance-abusing guitar hero, never to speak much of him again, made a naked grab for money and fame that inevitably ended in failure, and acrimony so bitter that much of their final show was played by roadies.

Or both, but let’s talk about the former.

I was too young and disinterested in popular music to have any awareness of what The Replacements were doing across the river in the mid-to-late Eighties, so there’s no nostalgia here for their legendary, shall we say, inconsistency as a live act. Belatedly discovering them in college was tinged by knowledge that I was one of a too-small group that would ever hear Let It Be and Tim. Replacements antics like their horrible performance (the second song, not the first one) on Saturday Night Live didn’t help the cause. Some find their self-sabotage endearing. Color me unimpressed.

But at least we have a truly great album left from the wreckage, something to give the Twins’ first World Series championship a run for its money as the best thing to come out of Minnesota in 1987. I like how Current DJ Jacquie Fuller sums up her response to Pleased to Meet Me:

I was a brooding new wave kid who hung out with a lot of SoCal punks, but I only pretended to like punk so they’d like me. The Mats made punk — dare I say — palatable for me, blending it with Westerberg’s singer-songwriter sensibility into a sound all its own: raucous, gritty, equal parts smart and joyously stupid, and completely heartfelt. Been a fan ever since.

“Alex Chilton” and “Can’t Hardly Wait” are justly remembered as the great singles (we’ll have more to say about Mr. Chilton in the next entry in this series; he played guitar on “Can’t Hardly Wait”), but there’s scarcely a weak cut on here. (I’m with critic Stephen Thomas Erlewine: “…down-and-dirty rockers like ‘Shooting Dirty Pool’ and ‘Red Red Wine’… feel like throwaways, but are necessary to the spirit of the record.”) And it’s utterly impossible for me to view “The Ledge” and “Skyway” objectively, since I pretty much taught myself to play guitar by accompanying them over and over and over. Each in the fifth slot on its side of the record and narrated by someone who starts or ends the song “above the filthy streets,” they make for an unlikely pair: the former is a pulse-pounding tour of the mind of someone about to jump to his death; the latter is simply the prettiest song penned by a rock-era songwriter from this side of the Atlantic.