Earlier this summer I looked at how the members of the evangelical Council for Christian Colleges and Universities (CCCU) fared in The Financially Sustainable University, a brief by Bain & Co. and Sterling Partners that has garnered significant attention (not all favorable). 32% of CCCU schools listed in that report were classified as “Financially Unsustainable” (including my employer), with the same share “At Risk” of falling into that category.

As I noted in June, there were significant problems with the nature of the Bain/Sterling analysis. One I emphasized was that while it included endowment information, that played no role in categorizing schools. So the CCCU schools praised as being “Financially Sustainable” tended to have a much lower endowment-per-student figure ($5,269) than the “At Risk” group ($12,585) or even the “Unsustainable” set ($8,845). 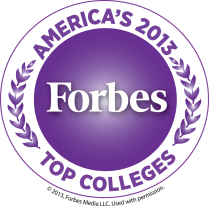 So it was interesting to see that when Forbes magazine came out with its annual college rankings last month (click down if you want to see how CCCU schools did in the overall rankings; I’ve discussed it before), it also assessed a “Financial Grade” to each institution it evaluated, but used a more diverse set of criteria. You can read the full methodology here, but in brief, Forbes‘ analysts used 2010 and 2011 data from the Department of Education to generate grades in the following categories:

112 of the CCCU’s 118 members were included in the Forbes evaluation of financial health. (You can see the full list of As and Bs here, and Cs and Ds here; no Fs for Forbes.) Here’s how the consortium compared to the entire set of nearly 1000 schools:

Now, the Forbes set is likely more selective than Bain’s, which includes over 700 more schools. But it’s certainly not good news that eighteen members of the CCCU fell into the D range (from highest “GPA” to lowest): Southeastern, Crown, Bethel (IN), Hannibal-LaGrange, Oklahoma Christian, Simpson, Warner Pacific, Huntington, Carson-Newman, Northwest Christian, Union, Southern Wesleyan, Toccoa Falls, MidAmerica Nazarene, Grace, Spring Arbor, Hope International, and Evangel. (Union, Huntington, and Carson-Newman do crack Forbes’ Top Colleges list, by the way.) Or that twice as many earn Cs as As and Bs together.

The five that earned As: College of the Ozarks (an A+), Wheaton, Abilene Christian, John Brown, and Goshen. Three of those (the three with the highest academic reputations: Wheaton, ACU, and Goshen) were labeled as “At Risk” by Bain, while eight of the CCCU schools earning a D from Forbes were deemed “Financially Sustainable” by Bain. So it’s hard not to take all of these rankings with a grain of salt, but I’m inclined to think that Forbes is more reliable here.

The Top Christian Colleges according to Forbes

At least for this cycle, I’m resolving to waste no more virtual ink parsing magazine rankings of colleges and universities, but for those interested, here are the twenty highest rated of the forty CCCU schools (including three “affiliates,” marked with an *asterisk below) that cracked Forbes‘ “Top Colleges”:

One thought on “Eighteen Evangelical Colleges Earn a “D” for Finances”