When I teach my class on Human Rights and International History (as I will again next spring), few issues are as vexing as that of female circumcision, a practice that has affected something like 130 million women around the world — including 2-3 million girls each year in Africa alone.

If you’re unfamiliar with it, you might start by reading the description in Nicholas Kristof and Sheryl WuDunn’s Half the Sky: (I’ll edit for length, in the process leaving out the most graphic piece of this section, but hopefully including enough to convey why I think it’s so urgently important to draw attention to this issue…)

[Beyond Africa] The custom occurs on a smaller scale in Yemen, Oman, Indonesia, and Malaysia; among some Bedouin Arabs in Saudi Arabia and Israel; and among Bohra Muslims in India and Pakistan. The practice varies greatly. In Yemen, girls are typically cut within two weeks of birth, while in Egypt it can occur in the early teenage years.

The aim is to minimize a woman’s sexual pleasure and hence make her less likely to be promiscuous. The most common form of cutting involves snipping the clitoris or clitoral hood…. In Malaysia, the ritual sometimes involves no more than a pinprick, or simply the waving of a razor blade near the genitals. But in Sudan, Ethiopia, and Somalia, it is common to see the most extreme kind, in which the entire genital area is “cleaned up” by snipping away the clitoris, labia, and all external genitalia. (p. 222)

As a father of a three-year old daughter, it’s hard even to read this description, let alone imagining circumstances under which I would want her to undergo female circumcision. 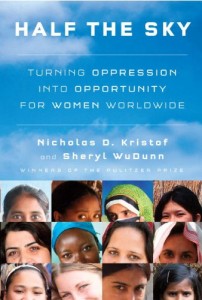 Beginning in the late 1970s there was a Western-led campaign against cutting. Previously the practice had been referred to as female circumcision, but that was considered euphemistic, so critics branded it female genital mutilation, or FGM. The United Nations took up that terminology, and international conferences were convened to denounce FGM.

…the international denunciations of FGM prompted a defensive backlash in some countries, leading tribal groups to rally around cutting as a tradition under attack by outsiders. Opponents eventually became smarter and backed off a bit, often using the more neutral term “female genital cutting,” or FGC. At least that didn’t imply that the women they were reaching out to were mutilated, which made it awkward to continue the conversation. (pp. 223-24)

For the record, the website for the movement that grew out of WuDunn and Kristof’s acclaimed book — like the World Health Organization — uses the “mutilation” version, as part of its page on gender-based violence, placing FGM alongside rape as a military tactic, honor killings, and domestic violence.

But that page also acknowledges the complexity that has led to debate about what to call a practice that strikes most in the West as an obvious — and often quite savage — violation of human rights:

…it’s not just the men: women too adhere to discriminatory social customs, and frequently are the ones to transmit to the next generation.  For instance, women are often the managers of brothels in poor countries or the ones who demand that their daughters’ genitals are cut.

Indeed, in their book, Kristof and WuDunn quote from their interview with a Sudanese midwife who may speak for many women whose lives are touched by genital cutting:

“This is our culture!”… “We all want it. Why is it America’s business?” The midwife said that she regularly cut girls at the request of their mothers, and that the girls themselves later thanked her. And that’s probably true. (p. 223)

It seems like a fair point to at least some of my students. Particularly those who major in anthropology and sociology are prone to nod along with the argument that “This is our culture!” and to agree with the question, “Why is it America’s business?” After all, the UN’s post-WWII attempt to draft what became the Universal Declaration of Human Rights (UDHR) received this critique from the American Anthropological Association in 1947:

Ideas of right and wrong, good and evil, are found in all societies, though they differ in their expression among particular peoples. What is held to be a human right in one society may be regarded as anti-social by another people, or by the same people in a different period of their history….

Today the problem [of drawing up a declaration of human rights] is complicated by the fact that the Declaration must be of world-wide applicability. It must embrace and recognize the validity of many different ways of life….

Especially at it was presented in the context of an analysis of Western imperialism (“…the history of the expansion of the western world has been marked by demoralization of human personality and the disintegration of human rights among the peoples over which hegemony has been established”), it is hard to deny that any kind of “rights-talk” that aspires to universality must grapple with cultural difference. In our class, the problem is amplified by the fact that we’ve got Christians discussing something that is practiced primarily (though certainly not exclusively) by Muslims.

And yet taking this too far leads down a relativistic rabbit hole. We need look only a few years before the drafting of the UDHR to find that a seemingly non-controversial human right like, say, the right of Jewish, Roma, gay and lesbian, and developmentally disabled people to live was “regarded as anti-social by another people.” (The Holocaust, of course, was a crucial impetus for the UDHR.)

It’s a point seemingly taken by anthropologists, whose professional association now asserts (in a 1999 declaration on “Anthropology and Human Rights“) that

As a professional organization of anthropologists, the AAA has long been, and should continue to be, concerned whenever human difference is made the basis for a denial of basic human rights, where “human” is understood in its full range of cultural, social, linguistic, psychological, and biological senses.

So if — acknowledging that there is substantial room here for cultural misunderstanding (e.g., the role of honor in a society) and that some women, even if given an informed choice, will defend the practice — we can agree that coerced female genital mutilation constitutes making a human difference “the basis for a denial of basic human rights,” how do we respond?

The Half the Sky site suggests the following:

Since these attitudes are embedded in culture, they will only change with education and local leadership. But outsiders can play a role in creating change too, in part by shining a spotlight on these harmful and sexist attitudes and traditions. By not speaking out we too are helping to quietly sanction this violence against women.

So yes, there is a role for privileged Westerners like, say, a blogger sitting in an air-conditioned coffee shop in suburban Minneapolis to play. But two principles come through from the website and, more so, the book: (1) that change requires “local leadership”; and (2) that “shining a spotlight” is not the same thing as wielding rights-talk like a moral bludgeon. Back to the book, where we left off with NGOs shifting to “cutting” rather than “mutilation” language in response to the backlash that saw its practitioners promoting it “as a tradition under attack by outsiders”:

More important, leadership passed to African women like Edna [Adan, a Somali midwife who runs her own hospital for pregnant women].

Perhaps the most successful effort to end cutting is that of Tostan, a West African group that takes a very respectful approach and places FGC within a larger framework of community development. Rather than lecturing the women, the program’s representatives encourage villagers to discuss the human rights and health issues related to cutting and then make their own choices. The program’s soft sell has worked far better than the hard sell. (p. 224)

Though founded by an American named Molly Melching, Tostan‘s village-level successes are led by local trainers who provide classes — to women and men — that run for up to three years as part of a “community empowerment program” that also seeks to expand literacy and schooling for girls and provides microloans to women running their own businesses.

Another model that steers clear of moral condemnation and seeks to build community consensus was recently featured in the New York Times. In Kembata-Tambaro, a largely Protestant Christian region of southern Ethiopia, only 3% now endorse female circumcision (the Times’ term), down from 97% at the end of the 20th century. That success has been attributed to the work of KMG-Ethiopia; the acronym originally stood for Kembatti Mentti Gezzima-Toppe: “women of Kembata working together.” It was founded by a local woman named Bogaletch Gebre, who was herself circumcised around age 12, pursued her studies in Israel and the United States, then returned to Kembata-Tambaro in 1997. Her group employs a strategy originally developed in response to Africa’s HIV/AIDS epidemic: community conversations.

…it is built on the ancient African practice of talking things out — community elders gather under a tree and discuss a problem again and again until they reach consensus. Gebre was the first to apply community conversations to the issue of cutting.

…”You must allow the community to decide for themselves rather than condemning,” said Gebre. “To make people understand the harm that comes to their children you can’t come in and tell them ‘you are doing bad and must stop.’”

Changing the law is a step, but only one step. In many places where cutting is outlawed, it is widely practiced in secret. “It doesn’t stop when they superficially raise their hands, or when religious leaders say ‘we declare it will stop,’” said Gebre. “It has to come from inside the community. It has to be discussed over and over again, in the African tradition. That’s how change comes.”

One thought on “Rights-Talk as Conversation, not Condemnation”