I’m not sure they have such celebrations in heaven, but at least down here, there should be some recognition that today marks what would have been the 100th birthday of the late, multi-talented Karl A. Olsson: writer, preacher, teacher, literature scholar, decorated veteran of World War II, former president of what’s now North Park University, and historian of the Evangelical Covenant Church.

I’ve written here from time to time about Olsson (“K.O.” to friends), particularly his role as an educator, and will post tomorrow on his complicated relationship to Pietism. Today, let me simply provide a biographical sketch for those not familiar with the “pre-eminent researcher, recorder, and interpreter of Covenant history” (to quote a much better biography, by Carl Philip Anderson — published in the Olsson Festschrift entitled Amicus Dei: Essays on Faith and Friendship, pp. 4-11).

Born June 10, 1913 in Benton, Washington and baptized at First Covenant of Seattle by E. August Skogsbergh (one of the Covenant’s founding fathers, and the first pastor of my own congregation), Olsson spent several childhood years in Sweden and Russia with his family, returning to the States in 1922. After graduating from North Park (Junior) College and North Park Theological Seminary, Olsson  earned his master’s in English at the University of Chicago in 1938 and taught at both North Park and U. Chicago. From 1942 to 1945 he served as a chaplain in the U.S. Army’s 11th Armored Division, winning the Bronze and Silver Stars and helping to liberate the concentration camp at Mauthausen.

(In addition to his service as a pastor for soldiers, Olsson filled pulpits in Covenant churches in St. Paul — as a 20 year old assistant pastor — and Stillwater, Minnesota and at Tabernacle Covenant in Chicago.)

After WWII, he returned to the University of Chicago, teaching and serving as an assistant dean of students while he worked on his dissertation (“Theology and Rhetoric in the Writings of Thomas Shepard”). After completing his PhD in 1948, he rejoined the North Park faculty, teaching literature in the College and church history and preaching in the Seminary (with a break for further military service in the Korean War). He became the school’s president in 1959, as the college began its four-year program.

The nomination was not without controversy, as Olsson acknowledged in a later history of the denomination: “I do not know the final vote… but I know that my candidacy was opposed by a significant segment of administrative leadership who for personal reasons or honest doubts about my acceptability by the Covenant at large hoped for a more promising candidate” (Into One Body… by the Cross, 2:361). Still, Olsson’s election was praised by the editor of the denomination’s magazine:

The choice of Dr. Olsson for the presidency of North Park College and Theological Seminary is a wise one, for he is a man of exceptional academic competence whose commitment to Christ is without reservation and whose loyalty to the church is an inspiration to all who know him well. In addition, he has a breadth of interest and a depth of insight which have won him widespread respect both within the Covenant Church and in the larger circles in which he has moved as an educator and preacher. Equally important, but much less well known, are the sincerity and warmth of his interest in other people, their problems, and their concerns. These attributes—together with his unusual gift of penetrating criticism which, while often sharp and unrelenting, is both without malice and personal feeling—make him an outstanding choice for the presidency of North Park College. (Carl Philip Anderson, The Covenant Companion, April 24, 1959)

Olsson resigned abruptly in 1970 to become director of training for Faith at Work and didn’t look back at his presidential tenure as having been all that successful. In a later speech, he reflected that he had hoped to

gradually produce a Renaissance court of grace and piety in the mode of Edmund Spenser or the Oxford Christian community of the 1930’s where young people ‘burning with intelligence and charity’ brought the likes of C.S. Lewis to Christian faith….

When I visited the campus recently a young woman asked if she could interview me for some class in journalism. Her first question was, “When you were here in the sixties, was the campus Camelot? I have heard it was.” I think I answered, “We may have wanted something like that but it never happened.’ And it never did. The campus was not Camelot, or Jerusalem, or Sidney’s Arcadia, or C.S. Lewis’s Oxford.

I do not now discountenance the vision. God knows that we burned many candles to achieve it. If focus, desire, unflagging energy, prayer, a great team of colleagues, highly motivated students, and the presence of a group of inspired and generous enablers could have bodied forth the vision, it would have come.

But it did not come. And it did not come because the more awesome and masterful the vision, the more control it required. And, as we all know, the Sixties were not designed for control. If you do not remember, that was the decade God was reported dead.

As it is, those were some of Olsson’s few unpublished thoughts. A prolific writer in multiple genres, he wrote several devotional books during his tenure at North Park, including Things Common and Preferred (1959, a collection of some of his columns for The Covenant Weekly  — in his lifetime he wrote almost a thousand articles for the Weekly and its successor, The Covenant Companion), Seven Sins and Seven Virtues (1962), and Passion (1963). In 1968 he found time to publish a novel about two pastors, The God Game. According to Covenant pastor David Larsen’s study of how the ministry has been imaged in Western literature, Olsson “shocked many of his constituents with his profanity and explicit sexuality but he is a witty writer and his word is studded with literary gems befitting his scholarly pursuits” (Oracles and Odysseys of the Clergy, p. 70). He also translated several Covenant hymns from Swedish. 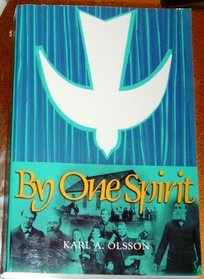 While Olsson continued to publish devotional works and group Bible studies through the Seventies (he left Faith at Work in 1977 and founded his own organization, Relational Ministries, before retiring), he is probably best known for his histories of the Evangelical Covenant Church:

I don’t mean this to be a hagiography. Olsson was a complicated man — prickly and gracious, arrogant and humble, impatient and loving — as he was all too ready to admit. Comparing his own spiritual journey to the conversion story recounted by C.S. Lewis in Surprised by Joy, Olsson wrote:

My process of justification was, as I recall it, neither so long nor so laborious as his. But, alas, my sanctification has proceeded in much the manner that he describes. I have been all my life a ‘kicking, struggling, dejected, and reluctant’ Christian…. God’s mercy is so great that even when we drag our feet He compels us to do what we are called to do. This is our salvation. Even those who sigh and grumble, and stew and fret, even God’s surly men, as long as they are God’s, are allowed to enter the land of peace. Shall we lift up our hoarse and reluctant voices? (Things Common and Preferred, pp. 171, 173)

By most accounts, however, he underwent something of a transformation after leaving the president’s office at North Park, with some of his more famous edges softening. Timothy Johnson (a former student of Olsson’s at the seminary who went on to some fame as the medical editor for ABC News) recalled the changes in a Covenant Companion column on Olsson’s 75th birthday. Though he counted Olsson one of the five elite teachers he had known, he described Olsson’s classroom as having an “atmosphere of both anxiety and joy,” with the professor’s brilliance a

double-edged sword—able to cut into ideas with a gourmet touch that could set the intellectual palate on fire but also able to cut into the heart and cause bleeding. Quite frankly, there were times when I was grateful I didn’t have to live with him full-time.

But Johnson reencountered him years later, after Olsson had gone “off to the liberating and purifying experience of relational theology”, and found him  “tender, vulnerable—dare I say Christlike?”

Olsson died June 2, 1996. Peace be to his continuing memory.