Today’s semi-rerun takes me back pretty far in the life of this blog, to December 2011. But then, the debate goes back to the eve of the Civil War…

“I tend to sympathize with those historians who dislike slavery and John Brown, in that order,” is how one of my most popular posts from the winter of 2011-2012 begins. Actually, the original sentence had the words “the many” instead of “those” in front of “historians,” but after a day’s thought I backed off a bit, confessing

I’m quickly realizing that I’m just an amateur when it comes to this aspect of US history; I ought not to make such grandiose historiographical claims, since plenty of recent scholars think Brown has been misunderstood, or are actually sympathetic to him.

Reviewing The Tribunal: Responses to John Brown and the Harpers Ferry Raid (eds. John Stauffer and Zoe Trodd) for the New York Review of Books back in March, literary critic Christopher Benfey began with Nathaniel Hawthorne visiting Harpers Ferry in 1862, during the Civil War. Out of the country during John Brown’s attempt to start a slave insurrection in 1859, Hawthorne had been commissioned by the pro-abolitionist Atlantic Monthly to write about his journey to the South. In his famous essay, “Chiefly About War Matters,” Hawthorne was ambivalent:

I shall not pretend to be an admirer of old John Brown any farther than sympathy with Whittier’s excellent ballad about him may go…. Nobody was ever more justly hanged. He won his martyrdom fairly, and took it firmly…. But, coolly as I seem to say these things, my Yankee heart stirred triumphantly when I saw the use to which John Brown’s fortress and prison house has now been put. What right have I to complain of any other man’s foolish impulses, when I cannot possibly control my own? 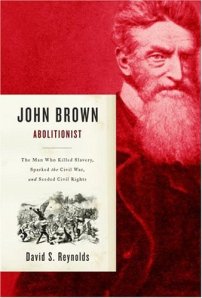 In the current issue of the journal, John Brown biographer David Reynolds responds fiercely to Benfey’s review, concluding that it

Benfey makes no mention of several recent books on John Brown that forcefully challenge the timeworn view of Brown as an incompetent, fanatical fringe figure who had little effect on the main course of events. Louis A. DeCaro Jr.’s “Fire from the Midst of You”: A Religious Life of John Brown, Robert E. McGlone’s John Brown’s War Against Slavery, Evan Carton’s Patriotic Treason: John Brown and the Soul of America, and my own John Brown, Abolitionist provide evidence that Brown was not insane, that he had a strong impact on mainstream politics, and that his plan for liberating slaves from mountain redoubts did not then appear implausible, especially in light of the precedent of successful slave revolts against overwhelming odds in places like Haiti and Jamaica.

Reynolds also dismisses Hawthorne as a “masterly writer but a political doughface who had virtually nothing useful to say about John Brown or slavery” and suggests more attention be paid to fellow New England writers and “erstwhile pacifists” Ralph Waldo Emerson and Henry David Thoreau: “Deeply opposed to slavery, they saw in John Brown a selfless martyr who gave his life for freedom.”

Benfey has a response to this, but more striking is the debate the two men have over Brown’s earlier role in the killing of pro-slavery settlers at Pottawatomie, Kansas. I think my earlier post makes clear which side I’m likely to take:

However awful the institution he sought to destroy by force of arms, however just the cause of abolition, it’s hard for me to embrace a self-proclaimed prophet who chose to “regulate matters” in “Bleeding Kansas” by abducting five pro-slavery settlers in May 1856 and, in James McPherson’s terse description, “coolly split open their skulls with broadswords. An eye for an eye” (Battle Cry of Freedom, p. 153). I suppose you could aver that atrocities were committed on both sides, that this was simply the nature of Kansas’s proto-Civil War, except that several of Brown’s own soldiers refused to take part once they learned his murderous intentions.

Indeed, Reynolds does so aver:

In describing Brown’s slaying of proslavery settlers in Pottawatomie, Kansas, Benfey fails to contextualize that incident adequately. He doesn’t mention, for instance, that of the thirty-six politically related murders known to have been committed in Kansas between 1855 and 1858, twenty-eight were committed by the proslavery side, as compared with eight by the antislavery one. In addition, gun-wielding Border Ruffians were taking over polling booths in Kansas and electing fraudulent proslavery legislatures there. More generally, the slaveholding South was a violent culture where bloody feuds, duels of honor, and vigilante justice against free blacks and suspected abolitionists were appallingly common. John Brown, as a journalist of the time wrote, “brought Southern tactics to the Northern side.”

Benfey is more than a little horrified by this:

Ah, contextualization, that magic wand by which so many bad deeds—the genteel word “slaying” is a giveaway—can be forgiven. Reynolds says the other side committed atrocities, too, committed more of them, and committed them first. That is always the defense for atrocities, in Srebrenica or Syria or, indeed, in the attacks on September 11. As Willie Lee Rose remarked dryly in these pages in 1971, in response to yet another “contextualization” of the slaughter at Pottawatomie:

The wickedness of the proslavery position and the guilt of its exponents in Kansas are generally understood, but it happens that none of those men of blood has ever been, at least to my knowledge, in the slightest danger of being canonized.

In his book on Brown, Reynolds concedes, twice, that “the Pottawatomie affair was indeed a crime, but it was a war crime….” Precisely what work, one wonders, is the word “but” doing in this sentence?

For what it’s worth… In Barbara Ehrenreich’s even-handed review of Reynolds’ Brown biography for the New York Times, she wasn’t terribly impressed by his handling of Pottawatomie either. Indeed, it helped her come to the conclusion that Reynolds’ book, “for all its wealth of detail and scrupulous attempts at balance, has a shockingly simple message: Far better to have future generations complain about your methods than condemn you for doing nothing.”

Click here to read the full exchange between Reynolds and Benfey.