With two exams to grade at work, it seems like a good moment to rerun some favorite posts from the first three months of 2013. We’ll start by stretching the “Best of The Pietist Schoolman” definition a bit and collate four posts I wrote for our department blog, at different points along the way in our travel course on the history of World War I.

Today’s a free day for the twelve students on the HIS230L World War I trip with Profs. Sam Mulberry and Chris Gehrz. Many will use the time to get in some final project research in London before leaving for a three-day tour of the former Western Front tomorrow.

We thought we’d share some highlights of the trip so far:

Memorial Tour
We started our first full day in Britain’s capital (last Saturday) in Trafalgar Square. In the shadow of Nelson’s Column, we read the philosopher (and anti-war activist) Bertrand Russell recall walking through that same square the day that Britain declared war on Germany in August 1914:

During this and the following days I discovered to my amazement that average men and women were delighted at the prospect of war…. I had supposed until that time that it was quite common for parents to love their children, but the War persuaded me that it is a rare exception.

After discussing reasons for the enthusiasm that greeted the beginning of the war, we walked down Whitehall towards the Houses of Parliament and Westminster Abbey, stopping to look at three war memorials along the way that stand in the middle of the road: a memorial to the women who served the British war effort during the Second World War; a traditional equestrian statue honoring the British commander on the Western Front, Sir Douglas Haig; and the decidedly non-traditional Cenotaph, erected in 1920 and past which a parade marches every November 11th at 11am (the moment of ceasefire on the Western Front in 1918) in honor of what’s now called Remembrance Day.

After a short Tube ride we found ourselves at Hyde Park Corner, where a huge arch celebrating Wellington’s victory over Napoleon at Waterloo towers over four WWI memorials. Two date to the 1920s: one honoring the artillery men who showered tons of shells on the German Army in 1914-1918; the other honoring British machine gunners with a Renaissance nude of David and this odd biblical inscription: 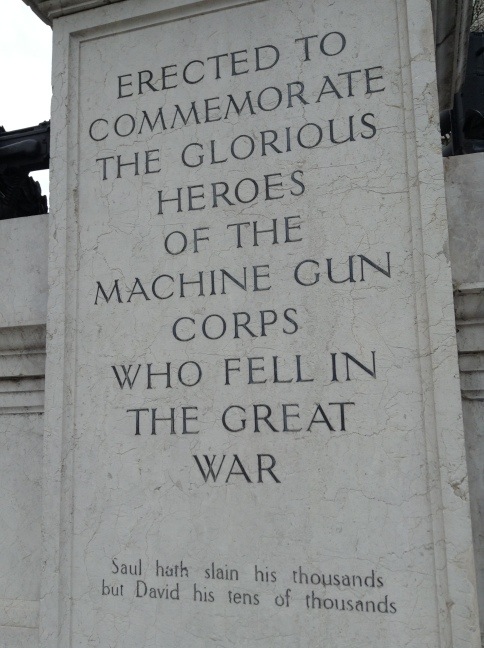 The other two memorials are from the first decade of the 21st century and commemorate the participation of Britain’s former colonies in the two world wars: one from New Zealand, and this one from Australia. (The large words are battles in which Australian forces took part; harder to see until you get up close is that almost the entire surface of the memorial is covered with names of Australian towns whose sons and daughters took part in WWI and WWII.)

One thought on “Best of The Pietist Schoolman: Teaching WWI in Europe”