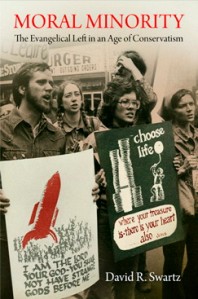 Perhaps the only benefit of having spent this past weekend laid up sick in bed was that I had plenty of time in which to finally finish David Swartz’s outstanding Moral Minority, the definitive history of the vast array of individual, communities, organizations, and publications that constituted the “evangelical left” in the late 1960s and 1970s. I knew a few of Swartz’s cast of characters decently well (Carl Henry, Jim Wallis, Ron Sider, Sen. Mark Hatfield), but as an evangelical historian still coming to learn the history of evangelicalism, I soon realized that I knew less of others than I’d thought (Francis Schaeffer, Samuel Escobar, Tom Skinner, Richard Mouw), and found myself happy to be introduced to people like John Alexander and Sharon Gallagher. Even-handed and rooted in wide-ranging archival research, Swartz’s book is a model of historical scholarship that should complicate how both evangelicals and non-evangelicals understand that movement.

Indeed, I came away from the book with only two rather self-centered quibbles. (The fact that this is all that bothered me even a little indicates the high quality of the book.) First, Swartz occasionally employs “pietistic” as a synonym for “quietistic” or “passive” — mostly happening in the chapter on Mouw and other Dutch Reformed evangelicals (I’ve previously blogged about the use of “pietistic” in that particular context). Second, he pays little attention to my own denomination, the Evangelical Covenant Church, which contributed at least two signers to the document that occupies the center of Swartz’s narrative, the 1973 Chicago Declaration of Evangelical Social Concern. (And the Covenant, then still very much a bastion of Swedish-Americans, might have provided a third case study of “ethnic evangelicals” who didn’t neatly fit neo-evangelicalism, though perhaps not as distinctive as the Dutch Reformed or Swiss-German Anabaptists that received chapters in Moral Minority.) In a sense, the two quibbles — both minor — go together, since the Covenant is so strongly shaped by historic Pietism and (in my lifetime) has exemplified the blending of evangelical piety and social concern that Swartz finds typical of the evangelical left (and, later, right).

Swartz frequently takes note of this combination of piety and politics showing up in surprising places (e.g., the communal residences of the counter-cultural Christian World Liberation Front in Berkeley, where radical politics went hand in hand with Bible study, worship, and Christian apologetics), without always probing how the two might nourish each other. So after doing a bit of digging, it was interesting to find that Paul S. Rees, one of the Covenant’s representatives to the Thanksgiving 1973 meetings that produced the Chicago Declaration (North Park Seminary professor F. Burton Nelson was the other), spoke on precisely this theme. 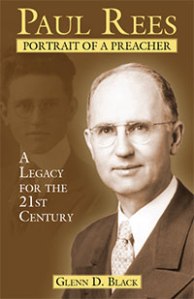 A prominent figure in the history of the Covenant (pastor of 1st Covenant of Minneapolis from 1938-1958 and denomination vice-president for the first half of the 1950s) and of neo-evangelicalism (president of the National Association of Evangelicals from 1952-1954 and actively involved in the work of the Billy Graham Evangelistic Association and of Christianity Today), Rees had been vice-president of World Vision for fifteen years when he arrived in Chicago in 1973. When given a turn to share a meditation at those meetings, Rees chose to speak on “Prayer and Social Concern” (published in the January 1974 issue of The Reformed Journal, one of the publications cited frequently by Swartz). Borrowing from Frank Laubach, the missionary almost as well known among fellow evangelicals for his writings on prayer as for his groundbreaking work in promoting literacy, Rees asked how prayer could lead to “windows opening outward as well as upward.”

First, he warned against treating prayer as a kind of escape:

We sentimentalize prayer too easily. Enamored of the forms and phrases of prayer, we mistake a shallow emotion for an authentic confrontation. Thus prayer becomes escape, not spur.

Alluding to the beginning of the Book of Isaiah (“Stop bringing meaningless offerings! Your incense is detestable to me,” 1:13), Rees acknowledged that “at one and the same time a society can be sinfully sick and sentimentally religious. Until both personal and corporate responsibility are faced God will continue to say: ‘Even though you make many prayers, I will not listen.'”

Rees then moved on to explore two ways in which prayer might inspire the “social concern and initiative” from which evangelicals had too often shied away. First, by promoting empathy:

If empathy is a fusion of imagination, perception, and emotion, a kind of creative concern that enables us in some very real sense to put ourselves in the place of others, then one of the values of prayer—if it is to be more than a verbal anesthetic—is that it gives the Spirit of God a chance to enliven our imagination, sharpen our perception, and deepen our emotion.

What does this have to do with understanding the social dimensions of the Gospel? Rees pointed to Jesus himself. In “the broad range of concerns that Jesus had for people in their varied situations of need,” his ministry flowed out of his compassion. This remained the model for Christ’s disciples, and it was joined with a life of prayer: 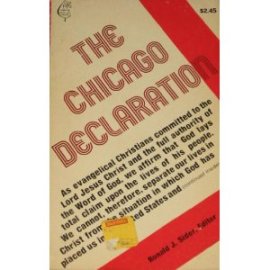 And, if nothing else, prayer “will perpetually remind us of our need to pray for more empathy,” as we discover how hard it is to love either enemies or friends. (I wonder how some of the more “strident” — to use one of Swartz’s adjectives — participants at Chicago took this admonition, coming as it did from one of the handful of “establishment” evangelicals present. Much as I found their witness creative and convicting, I was also struck by the self-righteousness of some of the more radically progressive evangelicals from the era, so certain of their own vision and unaware of their blind spots.)

But acknowledging that prayer as empathy alone risked leaving “vision and emotion unfulfilled,” Rees turned finally to the relationship between prayer and social engagement. He told the story of the Baptist missionary-abolitionist William Knibb but started again with the model of Jesus Christ, both a “theoretician” and a “practitioner”:

…the Jesus who both prescribed and practiced prayer, addressed himself to and became involved in the needs of the whole man, the body as well as the soul. True, he taught priority but never polarity. Even the priority was a priority of value, not necessarily a priority in time. He sometimes dealt with the physical need first and then the spiritual; sometimes he reversed the order.

This rejection of polarity — e.g., the false dichotomy between personal conversion and social reform — runs throughout Swartz’s account of the evangelical left, and showed up in a different form from Rees in 1977, when he wrote, “I shall go to my grave believing that the long years of controversial ‘pulling and hauling’ over the personal gospel vs. the social gospel was a poignant miscalculation. There was myopia on both sides. Now, thank God, the signs point to clearer understanding.” He added, “…nine-tenths of our either-or’s are abstractions of the mind rather than reflections of reality.”

3 thoughts on “Prayer and Social Concern: Paul Rees and the Chicago Declaration”