I may play the role, but I’m not a historian of Christianity, or any other religion. I edit books, write articles, give papers, and blog about Pietism, and I teach courses on Christianity and Western Culture and The Reformations, but my graduate education was overseen by this guy and this guy; I somehow never took a class from this guy or this guy, or even got to hear a lecture by this (sadly departed) guy. 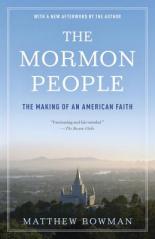 Which is why I’m so happy to find room in my reading for a book like Matthew Bowman’s The Mormon People: The Making of an American Faith. Setting out “to weave [the renaissance in Mormon history that’s taken place since the 1970s] into a coherent narrative, finding in this astonishing amount of timber something like the unity of a forest” (p. xxi), Bowman produced a page-turner of a historical synthesis. As a non-Mormon non-specialist who’s nonetheless quite curious about the history of the Latter-day Saints, I highly recommend it: it’s an introduction that leaves the reader wanting more.

As I write this, the American people are two weeks away from rendering judgment on the first Mormon presidential candidate to receive a major party nomination. (Not the first LDS candidate for the highest office in the land: that would be Joseph Smith himself — a brief candidacy briefly covered on pp. 87-88 of The Mormon People.) And Bowman is clearly aware that much interest in his book derives from interest in Mitt Romney and the faith that the former governor of Massachusetts only occasionally mentions on the stump or in debates.

Early on Bowman introduces Romney and his father George (also a governor and presidential candidate) as illustrating — by their nonchalance or lack of awareness about it — one of the major tensions in the history of Mormonism in this country:

Neither George nor his son Mitt seemed troubled by the fierce, combative tension between their faith and American culture that had so plagued their ancestor [Mitt’s great-great-grandfather Parley Pratt, an early convert, apostle, and missionary who saw the Mormons’ epic trek to Utah as an exodus from American oppression]. By their time, Mormonism had self-consciously surrendered its attempt to build an independent kingdom of God in the West and had instead found ways to articulate its values in the language of American virtue. (pp. xix-xx)

Though Bowman admirably balances professional detachment and personal commitment (see the Afterword on why “Writing about one’s own religion is always a tricky proposition”), it’s hard not to sense some regret as he describes how Mormons have accommodated themselves to the same American mainstream that once persecuted them.

In the process, it was hard to sustain Joseph Smith’s compelling (and, with its original millenarian overtones, frightening) vision of a new society that somehow wedded Jacksonian individualism to a love of structure, stability, community, and virtue. While church leaders like the charismatic David McKay (president in the 1950s and 1960s) still talked of “the pure of heart” embodying an “invisible kingdom of God,” the physical Zion of Smith’s Kirtland and Nauvoo and Brigham Young’s Salt Lake City was gone by the mid-20th century (p. 191). Not only had the church globalized and encouraged “outmigration” from Utah (the Romneys are reintroduced as exemplars of this phenomenon on pp. 224-28), but Smith’s “utopian socialism” had long since been replaced by an embrace of American-style capitalism (softened by the still-powerful impulses of tithing and mutual aid).

At the same time, Bowman presents an example of how reintegration with mainstream America helped Mormons redefine and retain a distinctive identity: the “syncretic cooperation between [Mormons’] faith and Progressivism” (p. 172).

Even after the Manifesto of 1890 encouraged Mormons to obey America’s anti-polygamy laws and a second one in 1904 more clearly prohibited the practice within the church itself, Bowman argues that Mormons could not simply discard “the principle” of plural marriage. For not only did polygamy serve as a “marker of Mormonism” to outsiders, but

even within the faith it lay near the center of Mormon identity. Even those who did not practice plural marriage had been told that they must accept it, if only in theory. It shaped how they imagined the afterlife, how they understood their familial relationships, even how they chose their homes and designed their living arrangements. For Mormon identity to survive, the principle could not simply be abandoned. Rather, it had to be translated, and a way to make its promises true and valid even in the world of the Manifesto found. (p. 160)

This need for a “reconceptualization” of “the principle” and other of Joseph Smith’s revelations prompted the “golden age of Mormon theology.” Strikingly, it was not led by trained theologians, but by scientists James Talmage and John Widtsoe and the brilliant, self-taught B.H. Roberts, all of whom were strongly influenced by Progressivism. Translating the Progressives’ faith in reason, education, and human effort into a confidence “that science, scholarship, and philosophy could help them better understand their religion,” Talmage, Widtsoe, and Roberts identified two core principles:

These principles prompted “a new emphasis on personal character, self-discipline, and morality as the primary pathway to salvation” (p. 166) that still characterizes Mormonism to this day.

But Roberts, Widtsoe, and Talmage came under fire from conservatives like apostle and church historian Joseph Fielding Smith (grandson of Joseph Smith’s brother Hyrum), who “[formulated] a version of the faith that exalted revelation and downplayed reason, that rejected engagement with the world in favor of emphasis on Mormon exceptionalism, and tended toward a pessimistic view of the progress of human civilization” (p. 180). According to Bowman, Mormon progressives were considerably more conservative than most liberal Protestants who also took cues from science and philosophy: “Though they were confident that the universe could be understood through reason and therefore believed that such scholarship might produce useful insights, they also believed that there were truths about God that could only be learned through revelation” (p. 181). Yet Fielding Smith — whose theology “corresponded,” in Bowman’s term, to that of early 20th century Protestant Fundamentalism — thought that Roberts and the others were finding too many insights in science, particularly those of evolutionary biology.

After Smith proclaimed that belief in evolution was heretical (against Roberts’ proposal that there were “pre-Adamite” generations of human beings and Talmage’s argument that animals and plants “lived and died, age after age, while the earth was yet unfit for human habitation”), church leaders in the early 1930s told both sides to avoid such divisive arguments, tried to bracket off certain scientific disciplines from the realm of religion, and began to focus on a more “diligent, dutiful, pragmatic religion… concerned less with faith than works and far less with theology than character building” (pp. 182-83).

So while the optimism of the progressives survived, the theological creativity that began with Joseph Smith and ran through the progressive theologians (and still causes so many of us evangelical Christians to be unsure what to do with Mormonism) gave way to “an increased emphasis on strong, centralized institutional authority (universally known as “correlation”) and a growing suspicion of theological innovation in favor of an emphasis on correct behavior” (pp. 190-91). Moreover, Bowman repeatedly notes a growing disinterest in theology, to the point that one factor now inhibiting dialogue with “traditional Christians” is that it is hard “to pin down precisely what orthodox Mormon belief is” (pp. 228-29).

But if Mormon theological discussion is not as robust as it might be, these debates seem, to this semi-informed outsider, to persist within Mormonism… The progressives’ principles seemingly undergird several of the key beliefs that Mormon scholar Terryl Givens underscored in a recent interview with Jana Riess: e.g., that God’s “heart beats in sympathy with the human heart”; that humans are “spirit beings” with immortal souls who came to Earth after being in the presence of God; and that, nonetheless, “Mortality represents an ascent, not a fall.” Givens (I should have added: co-author, with his wife Fiona, of the new book, The God Who Weeps: How Mormons Make Sense of Life) also seeks to present Mormonism “not only not to be elitist and insular, but to be expansive and liberal in the way we think about inspiration and salvation alike,” willing and eager to draw on sources of truth, wisdom, and beauty even outside of the LDS church — perhaps echoing the progressive theologians’ openness to the insights of scholarship by non-Mormons.

Here Givens regrets the influence of another amateur theologian, attorney and apostle Bruce R. McConkie (d. 1985), whom he blames for having “obscured” traditional Mormon belief in universal salvation. Bowman presents McConkie as an heir to Fielding Smith (his father-in-law), similarly distrustful of science and reason, focused on the Mormon canon of Scripture, and prone to employing a theological voice that was “stentorian and authoritative, [seeming] to brook no disagreement” (p. 201). Here too, Bowman finds resonance with conservative Protestantism — specifically the belief that “God’s truth is accessible to anyone with reasonable common sense” and the rejection of “the need for education, interpretation, or ecclesiastical authority to explain theology or doctrine” — while acknowledging a distinctively Mormon belief in direct, continuing revelation that “would be anathema to any Protestant fundamentalist….”