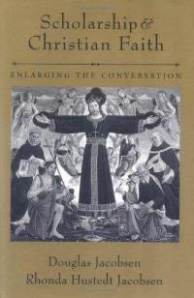 Few books have been as significant in my professional life as Scholarship and Christian Faith: Enlarging the Conversation, edited (and about half-written) by the husband and wife team of Douglas Jacobsen and Rhonda Hustedt Jacobsen, of Messiah College. I first encountered it in 2006, during a summer workshop at Bethel University led by the Jacobsens.

It came at an important moment in my career: I had finished my first three years in a Christian college environment, and while I found myself deeply invested in that model of education, I often felt uncomfortable with the prevailing language of “faith-learning integration.” The Jacobsens helped me understand why. Of the distinctly Reformed character of “integrationism,” they wrote:

This is a powerful vision of faith and scholarship, and it has spawned perhaps more sustained reflection on faith and learning than any other Protestant theological tradition. For this the Reformed tradition is to be complimented—truly and honestly complimented—even as we remember that this is but one way of understanding the task of Christian scholarship. The integration model is powerful precisely because its Calvinistic particularity gives it both clarity and a sense of consistency. Scholars from other traditions can gain insights from the integration model, but other Christian scholars—whether of the Catholic, Wesleyan, Lutheran, Pentecostal, Anabaptist, or any other non-Reformed tradition—will probably feel they are speaking a second language of sorts if they try to adopt the integration model in its entirety. Some of the core theological concerns of non-Reformed Christian traditions simply do not translate into integration-speak. Thus there is a need to acknowledge and nurture the development of other models of Christian scholarship that can stand alongside and complement the Reformed, integrationist approach. (p. 26)

Having been born and raised in the Evangelical Covenant Church and then employed by the school of the then-Baptist General Conference, two denominations shaped by a pietistic revival in 19th century Sweden, I was dimly aware that I was most at home in the Christian tradition known as Pietism, and felt very much that the integrationist model forced me to speak a “second language of sorts.”

While they described Pietism—or a more general “pietism”—as being one of the “primitivist” and “biblicist” traditions that were unlikely to sustain scholarship, they nevertheless encouraged their readers (and those of us in the workshop) to better understand how tradition shapes our scholarship, teaching, etc. So for the last five years—and likely for many to come—my chief research project has involved Pietist models of Christian higher education. (In this sense, this very blog owes its existence to these two Christian scholars.)

So I’m happy to see that their work on religion and higher education continues to attract attention from a growing audience. After editing 2008’s The American University in a Postsecular Age, the Jacobsens returned this year with a new book from Oxford University Press, No Longer Invisible: Religion in University Education. While not solely (even primarily) about Christian colleges and universities (e.g., state universities and avowedly secular private colleges are featured), the new book does extend one theme from Scholarship and Christian Faith, in that it may continue to encourage evangelicals and other Christian scholars to be less defensive about the perceived secularization of academe. Instead, we should recognize how, in the words of the late Rodney Sawatsky, in his preface to the earlier book, the “myth of declension has cramped our thinking and narrowed our reflection on the nature and character of Christian scholarship” (p. 5).

They recently provided an introduction to the themes of No Longer Invisible on Oxford Press’ blog. Here’s a sample:

Religion has “returned” to higher education, and the scope and nature of the learning taking place on campuses today is being enriched by this development.

We use the word “return” in quotes when referring to religion because the religion that is returning to higher education is a new kind of religion. In the past, religion usually meant historic religion or what is sometimes called “organized” religion. Many of the Ivies and older universities had been founded for the purpose of training students as ministers, and Christian or Judeo-Christian values and beliefs retained their strong influence on many colleges and universities until well into the twentieth century. But by the last half of the 20th century, secularization had become the academic norm, and religion was intentionally shunted aside, relegated to the private worlds of individuals.

In the last two or three decades religion in America has changed. Religion in America is now pluriform, a term we use to refer to the fact that American religion is now both pluralistic (because it includes all of the world’s historic religions) and spiritually brackish (meaning the boundary line between what is religious or spiritual and what is not religious has been thoroughly blurred). Some atheists may describe themselves as spiritual, and those who are non-religious (about 30% of the traditional-college-age population) often actively seek a religious-like sense of grounding, purpose, and meaning in their lives. As for trying to restrict religion to some kind of purely private or personal dimension of life, the terrorist attacks of 9/11 halted that myth once and for all.

Learn more about Rhonda and Douglas Jacobsen and their Religion in the Academy project at its website.

One thought on “Religion’s “Return” to Higher Education”