One day last month I ran into our university’s president as he was walking to his office, three books under his arm. One, by a member of our faculty, was on the Pentateuch, the first five books of what Christians regard as the Old Testament — the Torah of Judaism. I must have looked quizzical because he sighed and explained, “I could use some help with Leviticus.”

You and me both, Jay.

And I don’t think we’re alone as Christians who struggle with that book, or its scriptural neighbors Numbers and Deuteronomy, or with “The Law” in general. Year in and year out, one of my major challenges teaching at a Christian college comes up in mid-September, when I give a lecture on ancient Judaism in our Christianity and Western Culture course. It’s designed primarily to help give context for the entrance into history of Jesus Christ, who was, after all, an observant Jew of the Second Temple period followed by other observant Jews. And to understand Judaism at that time, it’s surely important to reach some kind of imaginative understanding of people whose recent ancestors day after day went to hear the priest Ezra read the “book of the law of Moses” and first wept, then rejoiced. Year in and year out, I tell of this story, from another part of the Hebrew Scriptures that Christians rarely visit (Nehemiah 8), and watch students look back blankly, unmoved.

Even though I trust that they too love Jesus (who came “not to abolish [the Law or the Prophets] but to fulfill them,” Matt 5:17) and believe that “All Scripture is God-breathed and is useful for teaching, rebuking, correcting and training in righteousness” (2 Tim 3:16, written by someone whose only written scriptures were the Law, the Prophets, and the rest of the Tanakh), most of our students — like me — are Protestants who have inherited Martin Luther’s difficult relationship with The Law. More than that, they’re 21st century Americans — like me — who would find most of the Bible’s specific laws seriously limiting of their freedom to act as they see fit. Most of all, they’re not ancient Jews; lacking the context that comes with growing up in that law-shaped community, they — like me — tend to dismiss books like Leviticus as strange and irrelevant. 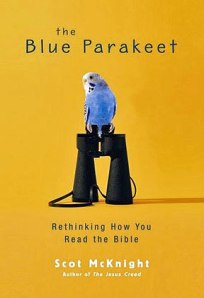 So I appreciate how Scot McKnight takes on Christian responses to Leviticus and other books of law in his The Blue Parakeet: Rethinking How You Read the Bible. Scot lists ten commandments found just in Leviticus 19 and suggests that most Christians don’t even bother to try following at least eight of them (including Sabbath-keeping, leaving some of the harvest for the poor and the foreigner, not wearing clothing made with two kinds of material, not eating rare meat, not getting tattoos, and standing up when the elderly are present). Why this pick-and-choose attitude?

These ten commandments are never part of a discipleship program; yet they are commanded by God in the Bible. Furthermore, it’s not like Moses is just giving a few good suggestions for special students who want to imitate him. In fact, these commandments are propped up with a profoundly theological comment—”I am the LORD your God.” And they all start with an even more profound comment: “because I, the LORD your God, am holy.” Moses anchors these commands in the holiness of God. Since God’s holiness doesn’t change, doesn’t it make sense to think God’s rules for his people don’t change either?

The quick answer to this question is that while God’s holiness doesn’t change, his will for his people does. This, then, leads to one of my favorite questions: How do we know which of those commandments change and which ones don’t? How do we choose? Who gets to choose?

Either we are completely wrong in our dismissal of these commands or we have some categories in our Christian minds to help us know what to apply to our lives and what not to. (I think it is the second option.) (pp. 116-17)

“How do we choose? Who gets to choose?” Just to turn attention on my own tribe… Moderate-to-progressive evangelicals are very knowledgeable and passionate about a very few verses from the Torah. Back to Leviticus 19: “…love your neighbor as yourself. I am the Lord” (v 18), which is, of course, quoted by Jesus himself when asked what is the greatest commandment in the Law (Matt 22:36-40). Or, again from Leviticus 19, “When a foreigner resides among you in your land, do not mistreat them. The foreigner residing among you must be treated as your native-born. Love them as yourself, for you were foreigners in Egypt. I am the Lord your God” (vv 33-34), which provides guidance for those of us concerned about immigrant rights — a subject that the New Testament addresses, at most, indirectly (e.g., through the child Jesus’ experience as a refugee, or extrapolating from more general ethical statements in Matthew 25 and other passages).

Yet we famously struggle with verse 22 in the preceding chapter, even though we probably don’t have a problem with most of the other injunctions in Leviticus 18 and even though that’s one Old Testament law reiterated by the Apostle Paul.

Back to Bethel’s president, seeking “some help with Leviticus.” Jay being Jay, his answer to the problem of the Pentateuch was to find a serious, thoughtful analysis by a well-respected expert in the field. 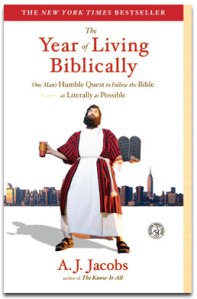 My response was to buy a used copy of The Year of Living Biblically, in which Esquire magazine writer A.J. Jacobs recounts how he spent one year trying to follow the injunctions of the Bible (both Testaments) “as literally as possible. To obey the Ten Commandments. To be fruitful and multiply. To love my neighbor. To tithe my income. But also to abide by the oft-neglected rules: to avoid wearing clothes made of mixed fibers. To stone adulterers. And, naturally, to leave the edges of my beard unshaven (Leviticus 19:27). I am trying to obey the entire Bible, without picking and choosing” (pp. 3-4). Jacobs’ next paragraph, in which he describes his own religious upbringing, gives you a hint that his quest will not exactly be a dry, academic exercise: “I am officially Jewish, but I’m Jewish in the same way the Olive Garden is an Italian restaurant. Which is to say: not very.”

Now, funny as he is, I wish that Jacobs had more often resisted the urge to lighten the mood with humor — sometimes it feels like he’s afraid to play it straight and engage seriously with the texts and tradition for too long. But while I’m not sure I thought as highly of Jacobs’ book as did Scot McKnight (who praised it in the chapter I cited earlier, “The Year of Living Jesus-ly”), like him I found The Year of Living Biblically “funny, insightful, and suggestive.” Jacobs’ conclusion is that no one can truly take the entire Bible literally: even the Hasidic Jews, snake-handling Pentecostals, and Amish B&B operators he encounters are selective in their literalism. Of course, Jacobs himself is the best proof of his own conclusion: some laws stick; others (Lev 18:22) he simply cannot begin to consider in a literal sense.

But to his credit, Jacobs wrestled with most every law. Even if he concluded that it wasn’t meant to be taken literally, it usually sparked some further reflection about what God intended by its observance, and perhaps how we (post)moderns could live it out in our own context.

For example: (bear with me on this one)

Now, there’s an out for a Swedish-German-American Christian like myself in part b of this verse and following: “All native-born Israelites are to live in such shelters, so your descendants will know that I had the Israelites live in temporary shelters when I brought them out of Egypt.” And this is all in the context of the Festival of Tabernacles, the holiday religious Jews call Sukkoth and religious Christians call… um, the first week of October (at least in 2012), as we go about our lives and sleep in non-temporary shelters.

So I don’t really have any intention of following Jacobs’ lead and trying to build a hut to inhabit for a week. (My wife could write a follow-up post on why such a project would bring serious danger to all involved.) But I was taken with Jacobs’ takeaway, when he finds his “elation” at having built a sukkah marred by the guilty realization that said hut is “way too comfortable”:

This is supposed to remind me of the ancient huts in the desert, but here I am in a climate-controlled apartment—no sand, no wind, and no lack of food. I don’t have to worry about the freezing nights or blistering days or plagues, which killed forty thousand of the six hundred thousand Israelites.

But that guilt, in turn, is relieved by this epiphany: This holiday is all about living biblically. God, if He exists [Jacobs is agnostic], is ordering everyone—not just those with a book contract—to travel back in time and try to experience the world of the ancient Middle East. God created “immersion journalism,” as my friend calls it. Maybe God approves of my project after all. (p. 80)

And this has clear implications for a history professor who includes paragraphs in his syllabi about the need to cultivate empathy and “imaginative understanding.” At some level, what I do is not simply about helping students understand when, where, how, or even why something happened as it did, but to make contact with the hearts and minds of those we’re studying and understand how it felt to be alive in another time and place.

It’s one of the reasons I’m so excited to take my World War I course to Europe next January, where students can come a bit closer to immersing themselves in a historic event: at least in the place, if not the time. So I caught myself thinking about adapting Jacobs’ Sukkoth experience to other, campus-bound classes: “Should I have students build a bomb shelter next spring in my Cold War history course?”, my mind actually asked itself.

That’s probably a step too far, but might the Law here encourage historians to view their classrooms as metaphorical “temporary shelters” that take students away from their usual habitation (not physical, but mental, emotional, and spiritual) and a bit closer to that of those who came before? (This is a half-baked mini-Midrash… For an extended discussion of how another of the books of the Pentateuch, Deuteronomy, teaches remembrance using objects and activities, see part 3 of my May 2012 talks on church history for the people of the church.)

2 thoughts on ““I could use some help with Leviticus””