In his scathing review (“pretty much an adventure in missing the point”) of Randall Balmer’s scathing review of Ross Douthat’s Bad Religion: How We Became a Nation of Heretics, philosopher Jamie Smith took particular exception to Balmer’s observation that “institutions, in my experience, are remarkably poor vehicles for piety.” 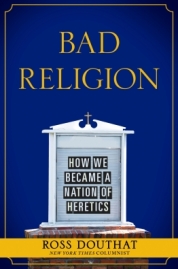 My post that follows isn’t actually about Douthat’s book, which I haven’t read. But some background if you haven’t heard about Bad Religion… Douthat, a conservative columnist for the New York Times, criticizes American Christians, left and right, for departing from what he sees as a centrist consensus that emerged after WWII and was anchored by mainline Protestant denominations. It’s an interesting take from someone who converted first to Pentecostalism and then to Roman Catholicism. A nicely balanced review comes from fellow Times writer Mark Oppenheimer. For a less kind response, see the review by Michael Sean Winters (beginning: “Ross Douthat’s analysis of religion in America is more sophisticated than the analysis of, say, Rick Santorum—but not by much”), which drew this heated response from Douthat. Back to regular programming…

Smith sees Balmer’s statement as cutting to the “heart of the matter: it is precisely the devaluing of institutions that Douthat decries, and it is just such an anti-institutionalism that has been woven in the warp and woof of American religion—perhaps nowhere more intensely than in the loose fabric of parachurchism that is American evangelicalism.” Especially in its “missional,” “emergent,” and “postconservative” manifestations, which Smith fears are simply repeating the “accommodationist” errors made by the mainline churches examined by Douthat:

I’ll put down my chips alongside Smith’s.

Now, on the one hand, I entirely understand why denominations and other institutionalizations of Christianity (even “Christianity” itself, to some who style themselves “Christ-followers”) can be frustrating. They seem to take a movement of the Holy Spirit and confine within the walls of a self-perpetuating, self-justifying human organization: just another social structure that can be blinded by the shine of power, wealth, and status, lose sight of its mission, and even squelch prophetic voices and enshrine disobedience to the Word of God. Such an institution can become the “imperial church” decried by Jay Phelan in a post that we examined here last week.

And they seem an utter betrayal of the Christian unity that Jesus prays for in John 17 and that the Apostle Paul encouraged in most of his epistles. (I’ve recently written on this, and won’t belabor the point.)

I hear versions of both arguments from my students at Bethel University from time to time. Many of them come from “non-denominational” churches (just under a quarter, according to the last survey data I saw), and many others have no plans to return to the Baptist, Lutheran, Evangelical Free, or Evangelical Covenant (to round out the top five from that data) churches of their childhood and youth. They are drawn to churches that prize “relevance” over tradition, innovation over custom, and Christ over Christianity.

Understandably. And yet… I fear that they underestimate both the dangers of anti-institutionalism and the benefits of institutions.

That was my inclination at their age. And then I realized that people who split from a denomination (or denominationalism) are very likely to split from each other. Impatient with the imperfection of human institutions like denominations, they unhappily learn that their new churches (or whatever non-institutional name they prefer) are just as imperfect and angrily vow to start over somewhere else. As one bishop with long experience in dealing with Christians who sought a “pure” church once taught: whatever form it takes, the gathering of two, three, or more in the name of Christ is still a mixture of the City of God and the City of Man.

The failure to learn this undeniably hard lesson is made all the worse when it’s magnified by an American individualism that insists that the only legitimate community is the one that the autonomous person contracts to join — a contract that exists only as long as the individual suffers it to. This can mislead us into thinking that Christian community is like the famous hall of mirrors shot in Citizen Kane: as much as we might proclaim a desire for fellowship in the diverse Body of Christ, I wonder if we don’t secretly hope to be surrounded by reflections of ourselves.

And as a historian, anti-institutionalism also strikes me as drawing far too much of its vitality from the presentist claim that roots do not matter, or at least that we get to choose which roots to honor. It is a modern vanity to think that we are not shaped by our past, or that we can simply choose to escape it and start over. (Or that we can skip back past centuries of inconvenient history and return to a “primitive” church that’s vastly more pristine in our imagination than it was in reality.)

Again, that’s not to say that what has been is what should be or must remain always. But rather than seeking (with Andrew Sullivan) to “forget the church. Follow Jesus,” or (with Balmer) to practice piety outside of institutions, we can take Jamie Smith’s advice and seek “revitalization” within existing structures that still have much to offer.

This is why I’m drawn so strongly back to the “churchly Pietist” tradition that gave birth to the denomination in which I was born and raised, and to which I’ve chosen to return and commit myself. Even as they disdained the “dead orthodoxy” of Lutheran churches ossifying under the influence of scholastic theology and political entanglements, Spener and Halle (and then their 19th century Swedish descendants Rosenius and Waldenström) refused to leave those bodies. Instead, they believed that people who had experienced the “new life” of regeneration could bring similar renewal to the institutional churches by living faithfully within them.

Of course, in this country, there was no state Lutheran church, so after some of these Pietists crossed the Atlantic, they founded synods that came together in 1885 as the Mission Covenant — now the Evangelical Covenant Church (ECC). It’s a small denomination, but a vibrant one. And its vitality comes in large part from the fact that — as Covenant pastor Ryan Eikenbary-Barber argued at our Pietism colloquium recently — the ECC coheres around mission, not ethnicity or creed.

So even if everything else I’ve argued above is wrong and one is able to invent a radically new, perfected, Christ-following, non-institutional non-church, I remain convinced by the logic that led my forebears (then known as “Mission Friends”) to covenant together, to pool the resources of individual congregations too small and poor to do the mission of God on their own. One needs only browse around the website of the denomination that resulted from their covenant to see that the “mission friend” spirit has not been smothered by institutionalization. It is precisely because I am a part of such an institution that I am able most fully to put my spiritual, vocational, and material gifts in service of a mission that — through the workings of systems, policies, procedures, and yes, even bureaucracy — makes and deepens disciples, starts and strengthens churches, loves mercy and seeks to do justice in countries around the world.

I’ll bet on that kind of revitalization any day.