The first of two guest posts this week comes from our friend Jared Burkholder, chair of the History and Political Science Department at Grace College.

The rhetoric that has surrounded the recent controversy in the CCCU and the departure of Goshen College and Eastern Mennonite University has underscored, at least for me, the way Anabaptist identity
continues to be misconstrued by many evangelicals. It has also highlighted the dualistic rhetoric that can be common among conservatives. Others could more effectively unpack the concerns I express below, but in watching this story play out, I wonder if Anabaptist notions of peacemaking, which surely make up part of the relevant context for these policy changes at Goshen and EMU, have received enough attention. (Though Chris has certainly pointed readers to this context in his coverage of this story.)

I do not often recommend dipping into the acidic pool of comments that follow online coverage of contentious news, but a glance at the comments section of stories about the CCCU in recent months will illustrate well-worn assumptions about why Goshen and EMU have adjusted their policies on hiring those in same-sex relationships. Conservative evangelicals have been quick to assume that these Mennonite schools are victims of cultural “drift,” that their commitments to “biblical” Christianity are weak, that they are too timid to resist “worldly” influence, that they’ve succumbed to pressure to be toler

ant, etc. Although these sorts of fundamentalist rhetorical paths have become routine, it is worth noting how these arguments can be nothing more than easy ways to dismiss opposing viewpoints without actually appreciating the depth of thought as well as ethical convictions those viewpoints represent. (Spring Arbor’s John Hawthorne has also commented on this.)

In reality, Anabaptist convictions, whether they be more “conservative” or “liberal,” are rarely the result of cultural drift. Indeed, as contented residents on the cultural margins, Anabaptists have been far more counter-culture in their Christian convictions than most American evangelicals – something that Anabaptist have sometimes been quick to point out.

Traditionally, Anabaptist notions of living out a counter-culture gospel have been embodied in the teachings of nonresistance and through fostering lives of modesty and simplicity. I like to recommend that Evangelicals read Don Kraybill’s Upside Down Kingdom, a dated, but still compelling treatment of the Anabaptist ethic.  In more recent decades, the Anabaptist peace ethic has come to represent more active (and even activist) peacemaking efforts that promote social justice. The history of this transition has been skillfully laid out by Ervin Stutzman’s From Nonresistance to Justice and summarized quite well in a post by Devin Manzullo-Thomas here at The Pietist Schoolman.

Before going further, it is important to point out that Anabaptism is not a monolith. In fact, fragmentation has always plagued Anabaptist groups and, as we have seen at this year’s Mennonite Church USA convention, diverse convictions continue to manifest in spirited debate and received attention from major news outlets. It goes without saying that conservative Mennonites and other Anabaptist traditionalists ha 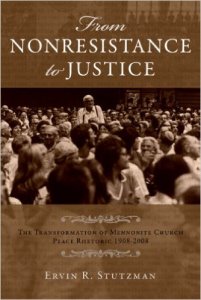 ve opposed this shift from nonresistance to justice. With regard to this question specifically, the Saskatoon (1986) and Purdue (1987) statements on sexuality are important markers. Among Anabaptist social progressives, Ted Grimsrud offers some of the most substantive counterpoints to the Saskatoon and Purdue Statements.

But the point is, if evangelicals would take the time to discern the core concerns that lay at the heart of the Anabaptist heritage, they would find a tradition of peacemaking that Anabaptists, regardless of where they stand on same-sex issues, believe is rooted in authentic and biblical Christianity and mandated specifically in Jesus’ teaching. This path is one where Christian faith mandates that others are not merely tolerated but embraced and where the oppressed are cared for through active service. This tradition necessitates inclusive attitudes precisely because those in the LGBT community have been so thoroughly marginalized and oppressed in the past.

Both evangelicals and Anabaptists value separation from the world, but they have divergent interpretations of how that separation should be applied to our society. While evangelicals have largely defined their separation from the world through participation in the culture wars, Anabaptists see such participation by evangelicals as no different from that of secular society. From an Anabaptist perspective, “the world” breeds divisions and conflict, defines insiders and outsiders, and gives preference to power, wealth and coercion. But Anabaptism teaches that to truly live separate from the world, Christians must reject all of this and swap it for the values of hospitality, compassion, service, and fair treatment.

While many conservative evangelicals assume these attitudes are just more of the same liberal nonsense, Anabaptist notions of justice flow from a peace ethic forged through generations of constant dialogue, reflection, and hard choices. Evangelicals will continue to disagree with the way (progressive) Anabaptists apply the ethical imperative of peacemaking, but we would all do well to acknowledge that the policy decisions such as those made by Goshen and Eastern Mennonite University are not the result of some form of moral weakness, cultural drift, or weak commitment to stand up for Christian faith, but rather the result of concerted ethical dialogue, biblical reflection, and a tenacious commitment to a robust heritage of peacemaking.

10 thoughts on “How Peacemaking Helps Frame the Context of Anabaptism, Sexuality, and Higher Education”