If you’re interested in Christianity (especially as practiced by Moravians, Pietists, Anabaptists, and evangelicals), history, education, and several of the other topics covered here at The Pietist Schoolman, then you’ll want to start following Jared Burkholder’s new blog, The Hermeneutic Circle. 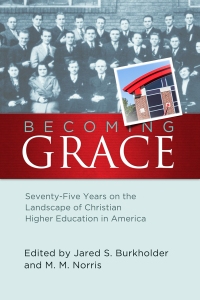 Well, not exactly “new”… A history professor at Grace College in Indiana and director of its Winona History Center, Jared actually started THC several years ago. (You can still read interviews he did back in 2012 with fellow religious historians like David Swartz and Jay Case.) Then while his own blog went on hiatus, Jared regularly guest-blogged here at Pietist Schoolman, writing almost thirty posts on everything from Islam and political revolution to the difference between public and academic history. Most recently, he penned an open letter to David Barton about how historians use primary sources.

(Then there’s his 2014 post on Moravian sexuality, which still draws all sorts of readers to a blog they might not otherwise have visited.)

Over the summer, Jared decided to revive Hermeneutic Circle, where he’s planning to write a new post once a week. He started with a thoughtful review of John Fea’s Believe Me, suggesting that John’s response to evangelical support of Donald Trump may have been colored by his years at a college with Anabaptist roots. Then he touched on another of my favorite themes by reporting on how he and his students got a different perspective on historical memory during a trip to Vietnam.

This past Monday Jared shared an especially personal and powerful post, on how academics experience anxiety and depression. Here’s a taste:

After a few years into my teaching job, my mood swings and anxiety began to resurface. I still didn’t see it for what it likely was, mainly because I didn’t associate my symptoms with depression. I have to give credit to my mother who first challenged me with “Are you depressed?!” on one of our family visits back home. I didn’t take that challenge well at the time, but my mother was right, as moms usually are. I also saw that this was affecting my family. A visit to the doctor helped me understand depression was a catch-all term, not just something sad people had, and later I learned that chronic but mild forms of depression can be especially difficult because they are often unrecognized.

As it turns out, this seems to be pretty common for academic types. Could it be that academe attracts souls who are prone to depression and anxiety and/or contributes to it at the same time? Based on conversations with other academics, it seems that impostor syndrome, at least, is just a normal part of being a grad student or new faculty member.  A quick search through past issues of the Chronicle of Higher Education or Inside Higher Ed reveals that academics can be some of the unhappiest and depressed people around.

I’m delighted to have Jared back in the blogosphere, and I hope many of my readers add The Hermeneutic Circle to their feeds.(You can also follow him on Twitter.) And stay tuned as Jared works on his new book project, on German Pietism in the American imagination.