I’d love to disagree with the thesis of historian Neil Young’s piece in Religion Dispatches, but he’s probably right that

…the bulk of white evangelicals’ political efforts have always veered to the right, often to the extreme. From Civil Rights to Vietnam to abortion to gay rights, from national defense to tax policy to climate change to health care and on and on, white evangelicals have solidly and consistently championed the most conservative positions.

He’s writing in response to retired Fuller Seminary president Richard Mouw, who had insisted that, despite white evangelical support for Donald Trump, he would not abandon a religious movement that (as Neil paraphrases him) “has been a force for the oppressed and powerless as much as it has served as a reliable bloc for the GOP.”

Not only do I think Young is right in his historical assessment of white evangelicals as a political force, but he’s right to push back against attempts by white evangelicals “to rewrite history and recent events in an attempt to disconnect evangelicals from the rise of Trump.” I don’t feel quite as viscerally angry as I did on Election Night, but I stand by my assessment that “At least as ‘evangelical’ pertains to Americans of European descent, it’s now clear that it chiefly describes the voting bloc that did the most to entrust the most powerful position on Earth to the worst candidate ever nominated by a major political party in this country.”

However, I also think that blogger Fred Clark is right that Young and Mouw can both be correct, if we understand their purposes for writing:

[Mouw] isn’t trying to defend his tribe, but to remind those within it — particularly students and younger people — that different ways of being are possible even for those within that tribe. He’s not defending white evangelicalism, just attempting to redeem it.

And that, I think, brings us to the real focal point of disagreement between Young and Mouw — between the historian who studies white evangelicalism and the pastor/professor who is a part of it. Young, standing back and viewing the thing as it is, does not believe that white evangelicalism can be redeemed or that it is worth redeeming. Mouw believes that it is and that it can be. (And of course he does — he’s an evangelical, after all, so he believes redemption and salvation are always possible.)

I’m both a historian and an evangelical, so it’s probably no wonder that I both take Young’s point about the past of evangelicalism and don’t discount the possibility of a different future for evangelicalism. 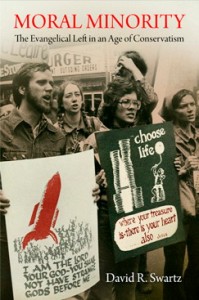 Mouw, of course, features prominently in David’s book on the politically progressive evangelicals of the 1960s and 1970s, alongside people like Jim Wallis (whose Sojourners magazine reprinted Mouw’s piece) and Ron Sider (who wrote a pro-Clinton editorial this fall in the evangelical flagship publication Christianity Today). It’s not unfair for Young to question the significance of something like the 1973 Chicago Declaration of Evangelical Social Concern and ultimately conclude that the “moral minority” has “never been more than a sliver of the larger conservative evangelical movement.”

But must it always be so?

Historians are not in the business of predicting the future. We can observe patterns and suspect that they will continue to repeat themselves as time marches on. But we also believe in change over time, complexity, and contingency, all of which diminishes the predictive power of such patterns.

Young skips over the fact that, between 1973 and the rise of the Moral Majority in 1980, evangelicals supported the candidacy of Jimmy Carter, himself a born-again Christian, and a key figure in David’s book. That that support soon receded was not inevitable, but historically contingent, a product of numerous factors — including the failure of the Democratic Party to appeal to theologically conservative Christians. And non-white evangelicals — who also feature in David’s book — have always been more politically complex than their white counterparts.

Moreover, we need only go back a century to find Christians with similar theological beliefs and religious instincts advocating for what at the time were progressive, if not radical, political positions. (Even the labor movement!)

So if I can step out onto a limb:

Can we imagine a historian like David sitting down in the year 2046 to write a history of politically progressive evangelicalism, one in which the chapter on 2016 documents the beginning of a significant generational transition?

People living through history are in a poor position to interpret it. But Mouw thinks he sees initial evidence of such a shift. He proclaims himself inspired by the students he meets on evangelical college campuses: “They care about the integrity of God’s creation. They want to put an end to homelessness, sex trafficking, the horrors of warfare. They are inspired by the marvelous growth of the Christian churches — often under very difficult conditions — in the Global South.” And he noted that, a year ago, “15,000 evangelical college students attending a major gathering sponsored by InterVarsity Christian Fellowship enthusiastically applauded a call by an African-American speaker to work diligently against racial injustice.”

Young dismisses this part of Mouw’s article — but here his evidence is far less convincing.

First, regarding InterVarsity, he claims that a New York Times article by Mark Oppenheimer shows that “support for Black Lives Matter quickly dissipated among these young evangelicals once they realized the movement’s intersectional stance acknowledged that gay and trans lives mattered too.” I don’t doubt that’s true among IV leaders (who both tempered their affirmation of BLM and later in 2016 made clear their opposition to same-sex marriage), but if you actually read Oppenheimer’s article, there’s no evidence of “young evangelicals” being uncomfortable with BLM’s “intersectional stance.” (He does quote historian D.G. Hart to this effect, but I’m sure Darryl would tell you that he’s neither young nor evangelical.) Indeed, this morning the Chronicle of Higher Education reported on growing support for gay rights among evangelical college students (subscription required).

Second, I appreciate Young quoting my post on election results in evangelical college precincts to suggest that Liberty University students were scarcely less enthusiastic than their president in supporting Trump. But if he’s right to trust my (flawed) approach, than we’ll also find plenty of evidence to suggest that young evangelicals rejected their leaders’ alliance with Trump. The Republican candidate apparently did quite poorly among students at leading evangelical schools like Messiah College and Bethel University, where I teach — and, anecdotally, have seen student politics shifting for several years now. (See this show of support for Black Lives Matter earlier this fall.)

I didn’t include Wheaton College in that post, but a Christianity Today editor found that Clinton won Wheaton’s precinct – mirroring the numbers in a pre-election poll of students.

Only time will tell if such results are harbingers of a shift in evangelicalism. I’m more moderate than progressive myself, but I’m sure I’m guilty of wishful thinking here. After all, students at schools like Bethel, Messiah, and Wheaton account for only a minority (moral or otherwise) of their generation of evangelicals. And it’s not clear that the Democratic Party has much interest in reaching out to them anyway.

Still, I don’t think we can foreclose the possibility of a generational change among white Christians who share most of their parents’ and grandparents’ religion, but not their politics. As one of my former students wrote here this fall, “there are seeds being planted in the Church right now that will have a longer term impact on Christian engagement in political life.”

One thought on “White Evangelicalism Has Been Politically Conservative… But Must It Remain So?”