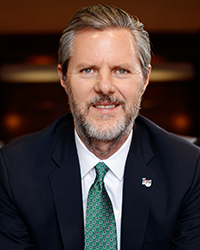 Having been one of the earliest, most vocal evangelical supporters of Donald Trump, Liberty University president Jerry Falwell, Jr. was widely rumored to be in the running for a cabinet spot in the new administration. But Falwell told Religion News Service that he turned down an appointment as Secretary of Education, in part because his family members “were concerned that the incredibly positive momentum that Liberty University is experiencing could be thwarted if I suddenly left to work in D.C.”

I’ll have more to say soon about what we might expect Trump’s apparent second choice for that position, Betsy DeVos, to mean for Christian higher ed. But given Falwell’s comments to RNS — and the announcement of a new Liberty hire — it’s worth revisiting a couple of 2015 posts dedicated to Falwell’s stated goal for Liberty: “To create for evangelical Christians what Notre Dame is for Catholics and Brigham Young is for Mormons.”

Having been placed on probation by its accrediting agency as recently as 1997, it’s remarkable that Falwell can entertain such a grand vision for what was initially a fundamentalist Baptist Bible college. But Liberty experienced a dramatic turnaround, with enrollment doubling on the fast-growing campus in Lynchburg and a massive online program helping net assets to top a billion dollars four years ago.

At the same time, Liberty has built up a Division I athletic program. Falwell told USA Today in 2014 that “My father used to say there were two universal languages all young people understood – music and athletics – and to build a world-class university those two components have to be a major part of it…. Athletics isn’t our mission, but it has the potential to shine a light on our mission like nothing else ever can.”

No doubt, it would be hard to be the Protestant or evangelical Notre Dame (or BYU) without a top-flight football program. (Insert your own jokes about the 2016 Fighting Irish campaign in the comments section.) But I suggested last year that Falwell was competing for the “Protestant Notre Dame” tag against an even better-resourced Baptist university that had a stronger track record in both athletics and academics: Baylor.

So color me unsurprised that Liberty just announced the identity of its new athletic director: Ian McCaw, most recently the athletic director at… Baylor. Falwell was thrilled: “You look at what Baylor was able to do during his tenure, it fits perfectly with where we see our sports programs going. This is an exciting time for us.” For his part, McCaw clearly had read Falwell’s statement about Liberty’s ambitions:

My vision for Liberty is to position it as a pre-eminent Christian athletic program in America and garner the same type of appeal among the Christian community as Notre Dame achieves among the Catholic community and BYU garners from the Mormons.

After McCaw took over in 2003, Baylor teams won four national championships and 56 Big 12 titles, and the school overtook the University of Texas as a football power. But this past May he was forced to resign in the wake of a sexual assault scandal that also cost president Ken Starr and football coach Art Briles their jobs. Baylor has now acknowledged that, since 2011, seventeen women reported sexual assaults by football players, including four gang rapes — at least one of which McCaw knew about, but didn’t report beyond the athletic department.

Questioned about the Baylor scandal, a Liberty spokesperson told Inside Higher Ed that McCaw “is a godly man of excellent character… If he made any mistakes at Baylor, they appear to be technical and unintentional, out of line with an otherwise distinguished record. We are completely satisfied that Ian McCaw is a good man and a great athletic director.”

Perhaps that’s true. But especially given that the hire was made by a university president of such naked ambition and questionable judgment, I still think — as I wrote the fall after the Baylor scandal first began to break — that “it’s an open question whether avowedly Christian institutions ought to be participating in a brand of football that… tempts institutions to compromise their convictions for the sake of competitive success.”