I don’t have the singing, playing, songwriting, or performing abilities the job requires, but I do know one thing about being a great musician: if in doubt, title your album something starting with the letter B.

By my count, I own twenty-five ‘B’ albums. While that’s two behind ‘S’ for the lead (and the fact that it would even occur me to check such a thing speaks further to the unlikelihood of me being a rock ‘n’ roll star), the quantity is matched by unparalleled quality. I’ve already expressed the opinion that The Band’s eponymous second album “might be the greatest recording, song-for-song, in the history of popular music.” Then there’s:

So it’s already an impossible task to pick today’s Albums A to Z entry, and I haven’t even got to the recorded output of Robert Zimmerman…

I don’t even own his self-titled debut, the massively influential Basement Tapes, or seven of the nine volumes in The Bootleg Series. And excluding several excellent compilations (Biograph being the most interesting) doesn’t help all that much when you’re still left with — impossibly — Bringing It All Back Home, Blonde on Blonde, and Blood on the Tracks!!

But rather than write 10,000 words on all of Bob’s B albums, I’ll cheat a bit and go with one of the two Bootleg Series releases that I do happen to own, since it includes songs from BIABH and BoB. 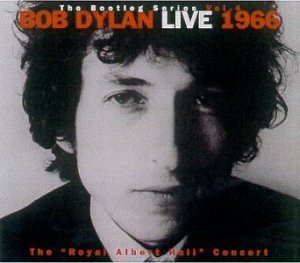 As a rule, I don’t like live albums all that much. The whole genius of great live music is that it can’t be reproduced — the same band might play the same setlist again in the same club to exactly the same people, but it won’t sound the same. And listening to music in the comfort of your living room or earbuds seems like it can’t begin to capture the sights, smells, and other sensations of being in the club or auditorium or arena.

But exceptions exist to prove every rule, and this recording of Bob Dylan and the band then still called The Hawks playing some of the greatest songs written by one of the greatest songwriters to an inexplicably hostile audience is simply stunning. Captured during Dylan’s famous 1966 tour of England, the May 17 concert actually took place in Manchester’s Free Trade Hall, but the tapes were mislabeled with the name of a London locale. Bootlegs of the electric portion of the concert circulated for years before finally being officially released along with the acoustic first half of the evening in 1998.

As Keith Phipps and Steven Hyden put it in their excellent recent Dylan overview, Bob Dylan Live 1966 “captures him at his most iconic, playing beautiful, stoned-sounding psychedelic folk songs on one disc, and fronting The Hawks for the angriest, most mind-blowing rock music of his career on the other.” Indeed, hard as it is to narrow down the B list to just one Bob Dylan album, it’s also hard to pick one half of the concert over the other.

The temptation, of course, is to pick the rock disc, simply because it documents the surreal phenomenon of an artist and audience engaged in a virtual war (and the audience itself sounds pretty divided). Having long since, in Hyden and Phipps’ phrase, “outgrew the scene that birthed him,” the amped, rockin’ Dylan infuriated his folk purist fans. Rather than simply move on and spend their dollars and pounds on flippin’ *Donovan records, however, they shelled out for Dylan tickets and the right, so they thought, to boo the turncoat mercilessly.

*Side note: During Dylan’s 1965 tour of England, D.A. Pennebaker filmed an encounter between the two singers at Dylan’s hotel. After listening to Donovan play a Dylanesque but trite “To Sing For You,” our hero calmly picks up the guitar and proceeds to rattle off part of “It’s All Over Now, Baby Blue” as a gobsmacked Donovan looks on, not sure if he’s being ridiculed or simply put in his songwriting place. It’s my favorite scene in Don’t Look Back, which probably means that I’m a much more horrible person than I let on… Anyway, back to the concert.

And before the electrified portion of the concert has got too far, it’s become clear that Dylan has chosen to take out his frustrations on the British ticket-buying public and leads The Hawks in unleashing the angriest performance recorded to that point in music history, sometimes refusing to acknowledge the crowd’s jeers (to be fair, many applaud him warmly), sometimes toying with them (“If only you wouldn’t clap so loud,” to those applauding sarcastically), and then, most memorably…

After a fan screams “Judas!” and another (harder to make out clearly) pouts that he wouldn’t ever listen to Dylan again, Bob snarls back, “I don’t believe you… You’re a liar.” He turns to the Hawks and yells at them to “Play f—ing loud!” Hawks drummer Mickey Jones (filling in for Levon Helm, who got fed up with the heckling back in the U.S.) cracks his snare drum and the band launches into a ferocious version of “Like a Rolling Stone,” the epochal anthem that opened Highway 61 Revisited.

So as a historian, the second disc is easy to prefer. But as a fan of Dylan music…

Given the world-historical significance (to go fully overboard) of the second act, I remember being surprised the first few times I listened: the acoustic half sounded terrific. I even felt a bit embarrassed by this reaction, as if my admiring Dylan unplugged (or maybe “pre-plugged”) somehow mitigated the stupidity of “Judas!” and his ilk.

Listening again, I’ll stick with that assessment. (Equal time: the great but sometimes baffling critic Robert Christgau sniffed, “What no one ever mentions about this legendary Manchester concert is that the folk set stinks. It’s arty, mannered, nervous, as if Dylan is sick of these songs, although three of the seven haven’t even been released yet…. if we owe the historians for the terrific electric disc, they owe us for the awful acoustic one.”) First, while I’m pretty indifferent to the first two songs (“She Belongs To Me” and “Fourth Time Around”), the closing five are among the greatest in Dylan’s canon and are sequenced nicely: “Visions of Johanna” (my personal favorite — hearing “the ghost of electricity howls in the bones of her face” takes on special resonance given what’s about to happen after the intermission), the aforementioned “Baby Blue,” the epic “Desolation Row,” “Just Like a Woman,” and “Mr. Tambourine Man.” More to the point, Dylan sings them beautifully. If your idea of Dylan’s singing voice was fixed by the incomprehensible wheeze of Dana Carvey’s Oh Mercy-era impression, then play “Visions of Johanna” and “Mr. Tambourine Man” and marvel as Dylan’s expressive, nuanced voice fills the hall. And — as on the break starting at 2:51 of “Baby Blue” — his harmonica-playing is also pretty nimble. (There’s a great photo of Dylan soaking his harp in a glass of water on p. 14 of the splendid booklet that accompanies the CDs — “an old bluesman’s trick,” the caption teaches us). It sounds far better accompanying only Dylan’s acoustic guitar than when paired with (and sometimes fighting against) the band on disc two.

That said, the set with The Hawks proves to be almost as musically exciting as it is historically significant. Disc one ends with “Mr. Tambourine Man” being played thirteen months after The Byrds’ cover of that song launched “folk-rock,” then disc two starts with Dylan and Co. playing a very different version of that genre, rooted in the blues (see especially “Leopard-Skin Pill-Box Hat” but, throughout the whole set, Robbie Robertson’s lead guitar playing, which Christgau described as being “…so cockeyed funky he almost careens off the stage”) and hinting at the psychedelic rock of Jimi Hendrix. You might wish for some different song selection (I would trade out “I Don’t Believe You (She Acts Like We Never Have Met)” for several alternatives from the great triad of 1965-1966 albums) and Dylan’s vocal gets a bit buried on “Ballad Of A Thin Man” when he shifts to piano. But in addition to “Pill-Box Hat” and the album closer, “Just Like Tom Thumb’s Blues” is predictably excellent, with exhilarating organ fills by Garth Hudson and a searing Robertson solo.

What was most surprising this time is how much I enjoyed the three songs that most critics seemed to wish had been replaced in the set list. “Tell Me, Momma” isn’t a great lyric by any stretch, but it opens the set with such a tight performance that it makes part of me wish that Dylan & The Hawks had simply stuck together as an ensemble. Then the one non-Dylan original in the line-up, the traditional blues “Baby, Let Me Follow You Down,” simply rocks, with Rick Danko’s bass sounding especially powerful. The same is true of “One Too Many Mornings,” which I repeated simply to hear Danko punctuate each chorus by packing a song’s worth of emotion into backing Dylan on the word “Behind!”

…at bottom, what truly matters is that one night in 1966, a poet stood on the stage with a band he chose to help him propel his vision and made incredibly powerful music which was utterly unique. He was true to his vision and he went right to the edge for it. To this day, this concert stands as one of the greatest events in rock music.

Bottom Three “Weakest” Track(s): “Fourth Time Around”; “I Don’t Believe You”; “Ballad Of A Thin Man” (for sound not song quality)

Other Nominees: see above, plus… Kathleen Edwards, Back to Me; The Civil Wars, Barton Hollow; Ron Sexsmith, Blue Boy; The Wallflowers, Breach; The Raconteurs, Broken Boy Soldiers; The Bottle Rockets, The Brooklyn Side. I guess the lesson here is: pick a ‘B’ title for your album if you want to get my money.